We're nuts for these sisters' products! 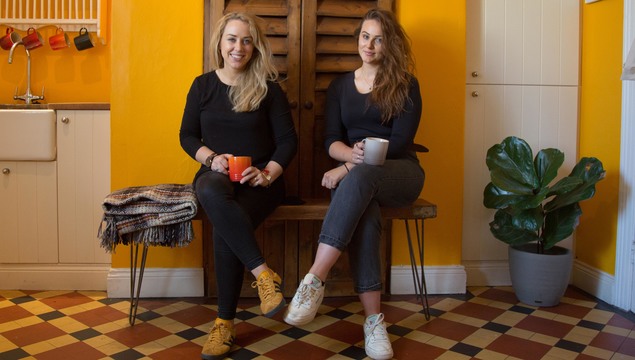 For sisters Eliza and Evie Ward, a career in the food business was almost always going to be on the cards because of their family upbringing. They are daughters of the legendary Irish food champions Peter and Mary Ward, who own Country Choice in Nenagh, County Tipperary. Here, Jordan Mooney chats to Evie Ward about family life, food ethos and the sisters' successful business – Nutshed.

Growing up in a family-run business, Eliza and Evie were immersed in the day-to-day of Country Choice deli an café from a young age. Run by their parents since 1982, it is a go-to stop for anyone looking for great Irish and local produce and freshly served food.

"My dad comes from an agricultural background and 37 years ago he met my mam and they opened Country Choice together. It’s a really special store, they had all the amazing producers, like Gubbeen and Milleens Cheese from the start. Dad was making things like collared head or terrines with tongue, plum pudding, and soda bread, but he was also bringing in things like amazing teas and teaching people to make their own yoghurt. A lot of people say that Ireland had no food culture, but I can say that they're wrong. Look at what Dad has been doing for 37 years and he certainly wasn’t the first.

There are generations of people in Ireland who were surrounded by food; Eliza and I were lucky enough to grow up with this amazing food and beautiful producers. We learned a great appreciation for it and we learned to eat with the seasons. All winter, we’re absolutely dying for a tomato, but they don’t come in till summer so we wait for them, and then all we eat for summer is just lovely tomatoes! It’s a very natural way to eat and it’s second nature to us."

⚡️Selection Box⚡️ our Christmas selection boxes are now ready to go! They’re tailor made so you can pick your favourite 4 squares & 4 rawbs, or we’ll make up a mix. Just head into the market on Saturdays or DM us to order one & we’ll have it ready🎄

Was starting your own food business almost second nature to you as well?

"I always knew I would do something with food. When I was 11, my dad gave me a gift of Nigella Lawson’s ‘How to be a Domestic Goddess’ and within a week he told me he would pay me to make brownies for Country Choice. Now he was absolutely overpaying me, but he could see the interest in me and it gave me an incentive to cook. It made me understand that I could work in a kitchen and make money. My parents told me I’d always remember the first thing I ever bought with my own money and it was a shiny pink iPod mini, I’ve never forgotten how that felt.

Eliza started doing festival food when she was 19 and I was around 16. We were on the road a lot and cooking really high-quality, sustainably-sourced food that was based on whatever glut crops farmers had. In 2014, when I was about 23, I started a stall in the Milk Market in Limerick where I was selling raw nuts, oats, and granolas, but I was still spending my summers doing events with Eliza. I started making plant-based raw energy balls and bars to keep us going. The first product I developed was the hemp and goji ball, which is really flavourful and earthy. I was handing them out to people during service to keep our energy up and we soon realised they were doing the absolute best job. We started to wonder if people would buy these at the stall – customers were always asking what they could do with the ingredients – so I thought they could be a good addition.

At the time I was also making lots of beetroot brownies myself at home, so that was another one of our first products. I trialed them on the stall along with the nuts, but then the raw products started to get more popular and took over. Now it’s four and a half years later and the stall is all raw foods, like vegan cheesecakes, raw energy balls, peanut butter, and raspberry blondies and more.

Three years ago (2015), we started a wholesale side to the business selling to Sprout & Co. In the past 12 months, we got our own production unit. Initially, we were working out of our parents’ kitchen at Country Choice in Nenagh, Co. Tipperary, which they’ve had for 37 years; I was working in the dead of night and on Sundays when they weren’t there. It made for really long days!"

Has your family background inspired where you want to go with your business?

"Yes, definitely. Even though Nutshed and Country Choice couldn’t be more different, the ethos is exactly the same. Dad doesn’t know the first thing about plant-based food, but when we sit down to talk about work or how the day has gone, it’s the exact same ethos and conviction. It’s important for us to learn from our parents, to learn from what they do and what they don’t do. Dad is a big believer in letting us learn from our mistakes and swooping in at the very end to say, ‘I knew that was going to happen!’

The advice everyone gives you in business is to get to a point where you can delegate, which is obviously great advice, but I come from a family of absolute grafters so that hasn’t exactly worked for me! My dad works every single day in the shop and I think that’s rubbed off on me. I’m still delivering all the products myself around the country, which is tough but I love it. It’s nice to meet the people who are selling the products and develop that connection with them. You need to chat with people to make sure they’re happy to sell the products. Our generation cares where their food comes from and I want people to know that we are hand-making these products. I think It’s really important to stay connected with people and I love going in and out of the shops and meeting people. I can spend three days in the office, which is stressful, but then when I get back in the kitchen I remember that that’s why I’m doing this and working so hard, to make such incredible food." 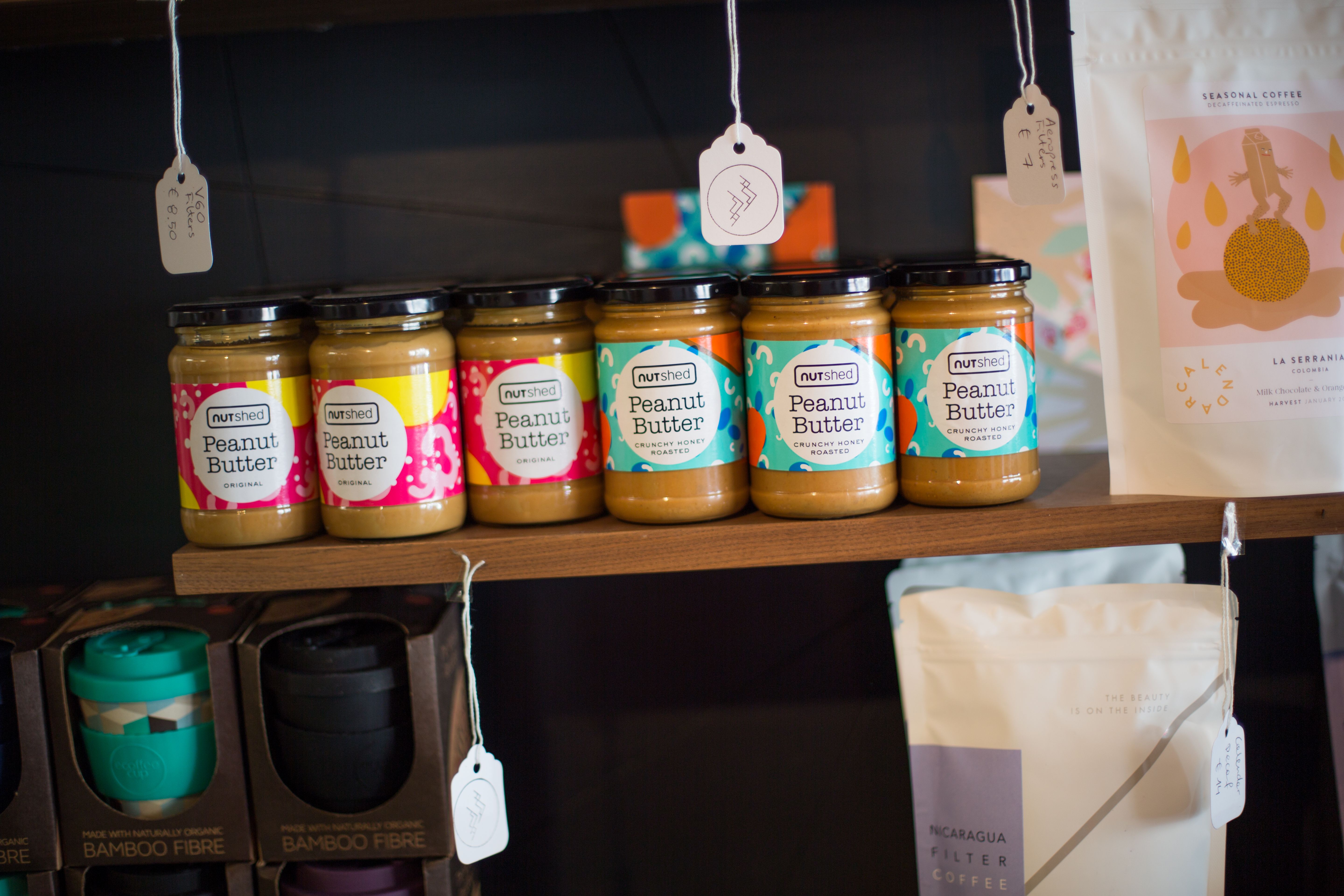 This summer we launched our peanut butter. We were making the peanut butter as an ingredient for loads of our products and we thought it was delicious, so we started selling it at the stall and it flew out! At Bloom Festival this year, we launched it properly and now it's in 30 specialty stores around the country. We have a really nice relationship with the people behind these stores, they really get our ethos, so it’s been great working with them."

"We have the original peanut butter, which we make with peanuts that we roast ourselves, Madagascan vanilla extract and a pinch of stevia to just balance it out. It’s really smooth and spreadable. We hand make it in small batches, we don’t actually make it until the shops order it from us and then it’s sent to the shop the next day, so it’s as fresh as possible.

We do the peanut butter for foodservice too, so it starts in a 280g pot and goes up to 5kg buckets."

You know you can order our full cheesecakes for collection from the Milk Market aaaany Saturday, doesn’t even have to be an occasion. You can just DM us and treat yourself to a cake, you can eat it all or pop some in the freezer for later..do you bbz ❤️

What is your plan for the future?

"I’d love our peanut butter to be the go-to peanut butter in the country. I think it’s possible because when people can access it and they try it, then they love it. We’ve recently started shipping our treats, so I’d love to see them in the four corners of Ireland.

In five years time, I’d love to be doing a bit of retail. Our peanut butter energy ball is so popular and people always ask where can I buy it, so I’d love to be able to direct them towards more retail stores. I definitely think we can do it but it’s just something that takes time, and that’s something we’re short on at the minute.

In this day and age, if you love what you do and you can make a living from it that should be enough. That’s what I think of as success and that’s all you can ask for. The goalposts always move with the business, so there’s always something else to build on or to do, so I think you can only really ask to be happy."

You can find NutShed at the Milk Market in Limerick every weekend or buy their products in Avoca and Sprout & Co. stores. Check out their website for more information about their tasty treats. 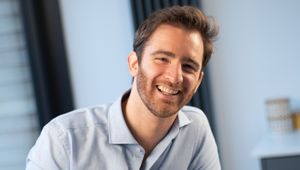 In the kitchen with Shane Ryan 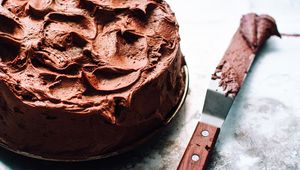 Who says that Monday 21 January has to be the most depressing day o... 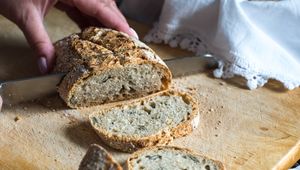 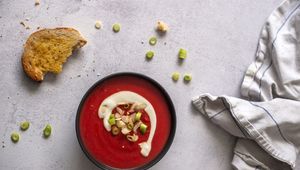 A simple, robust, cold-weather soup that you can make with almost a... 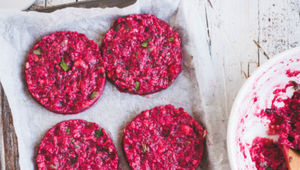 Gone are the days of bland, boring veggie burgers! Serve with fluff... 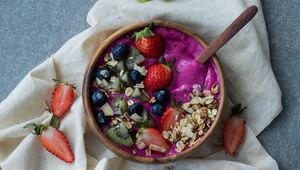 Easy vegan swaps to master this ...

Make your life a little easier - and tastier - with these ideas. 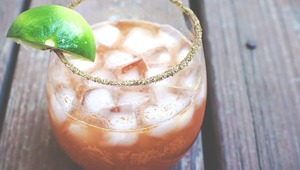 Fiery, fruity and fabulous - give one or two of these concoctions go 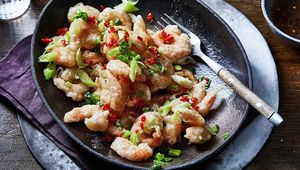 Once you try your hand at this takeaway classic, you'll never pick ... 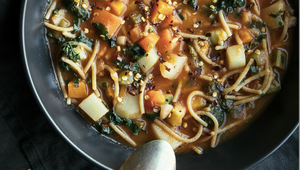 A hearty and filling soup that's full of goodness 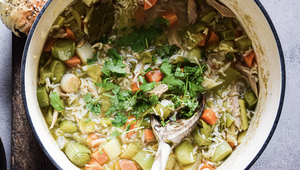 In the kitchen with Shane Ryan

Who says that Monday 21 January has to be the most depressing day o...

A simple, robust, cold-weather soup that you can make with almost a...

Gone are the days of bland, boring veggie burgers! Serve with fluff...

Easy vegan swaps to master this ...

Make your life a little easier - and tastier - with these ideas.

Fiery, fruity and fabulous - give one or two of these concoctions go

Once you try your hand at this takeaway classic, you'll never pick ...

A hearty and filling soup that's full of goodness