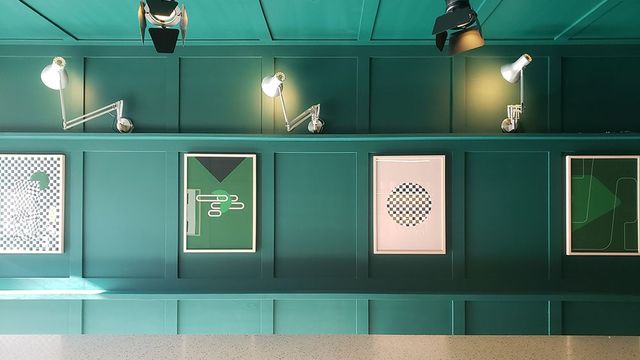 Our restaurant critic, Aoife Carrigy gets seriously comfy in one of Dublin's newest wine bars – and no, it's not a butcher as well – Frank's.

Fun Fact: To become a butterfly, a cocooned caterpillar digests itself before reconstructing itself out of its own soup. Or so Scientific American tells me.

No, there’s no caterpillar soup on the small plates menu at Frank’s Wine Bar. But, since eating here, I’ve been thinking about cocoon-like environments and their effect, which is to lull you into a transformative sense of security before re-engaging with the world, buoyed by renewal.

Frank’s feels like a cocoon. The effect is partly physical, achieved by the forest green walls and ceiling that overarch the chequered floor and central Corian countertop (like marble but modern). Bookish spotlights hang jauntily over framed graphic prints inspired by the space’s former incarnation as Frank’s Pork Shop. A few stools by the street-side window appear to be mostly for overflow rather than for the main action, which is to perch around that counter, glass in hand and graze through some of the smart cooking that head chef Chris Maguire (previously of Locks) is turning out. 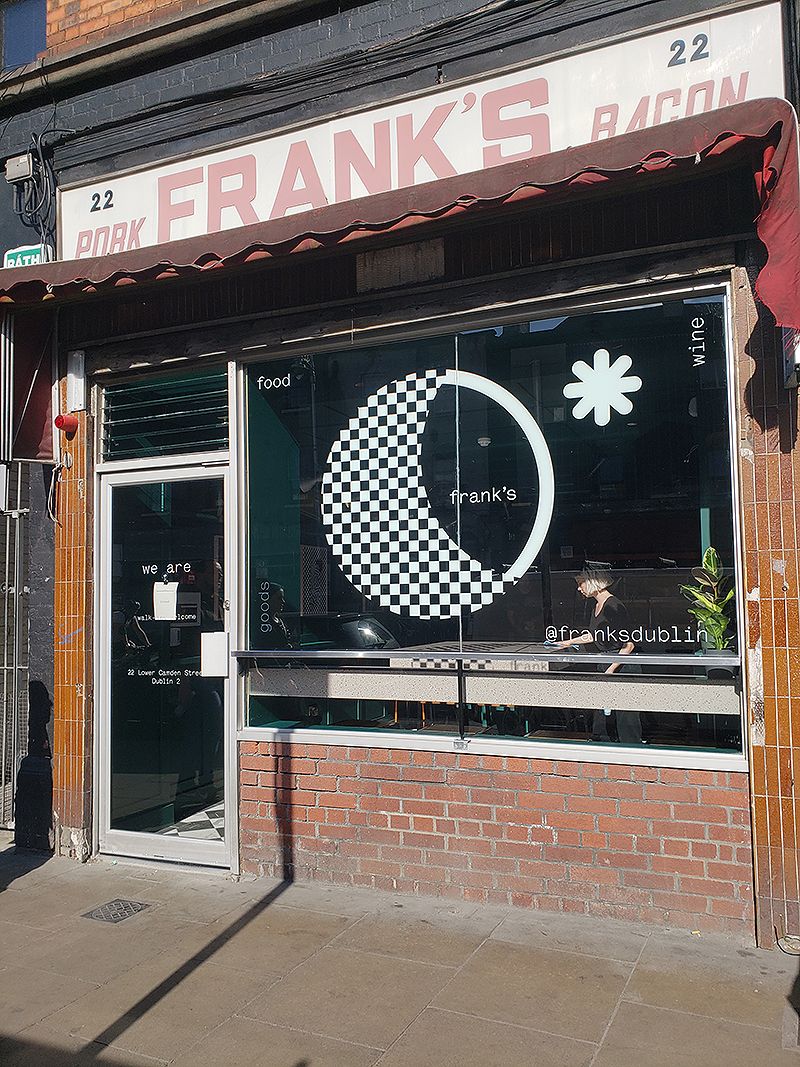 I say head chef, but Chris is both boss and brigade. He quietly beavers away at the counter, in full view of diners. Even the steel shelves of wine bottles (available to go) and branded wine glasses (marked for the 125ml house pour) draw your eye towards his bijou chef station, suggesting ‘yes, you’re welcome here for a glass of wine, but Chris’s food is where it’s really at’.

The effect is intimate, with everyone checking out what everyone else is eating and drinking, and conversations flowing between the 20 or so stools.

Kevin Moggs is a fine host, his calm and understated style of hospitality honed during years at ely wine bar – and more recently in Delahunt, which is not so much the sister restaurant of Frank’s, as the mothership.

Darren Free, Delahunt’s chef-turned-proprietor, devised this small plates wine bar as an overflow for his busy neighbouring restaurant, which gets heavily booked. Frank’s no-booking policy makes it somewhere you can happen upon because life took you there on that particular day. 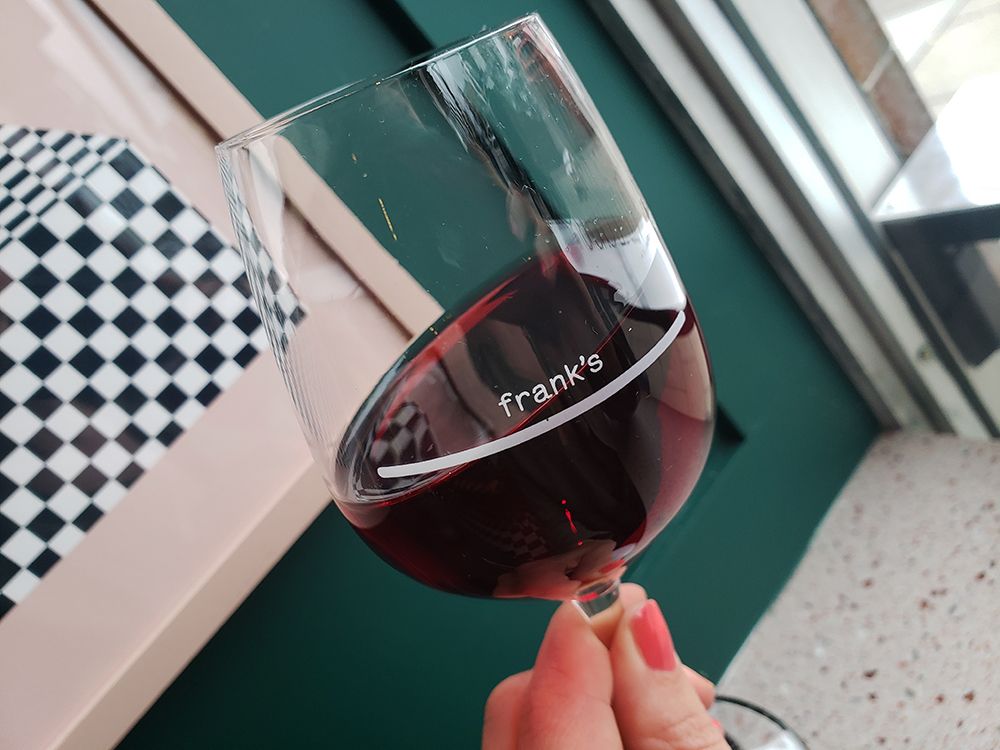 To guarantee a spot at that communal table, arrive early and willing to hover around a glass of Fernando de Castilla amontillado sherry (superb value at €3.50) with smoked almonds (€3) or meaty Nocerella olives (€3.50) until a stool comes free. If sherry’s not your thing, there’s frothy prosecco or nuanced El Bandarra vermut, both on tap from Winelab, or two dozen mostly European wines (from €4.50–€10 a glass) with an emphasis on minimal intervention.

A one-pager menu of snack and small plates is served from 5pm Thursday to Sunday, with a charcuterie, cheese and crudo offer on Wednesday. When I arrived at 5.45pm, the place was in high-octane swing. By 6.30pm, it was calm and cruisy and new arrivals had their pick of seats. Some of that first wave was in and out within an hour, grabbing a quick taster and drink before a meal elsewhere; my sister and I stayed for several hours, manoeuvring from one shared plate of deliciousness to the next. That’s the other thing about cocoons... You stay as long as you need to and leave them when you’re ready. 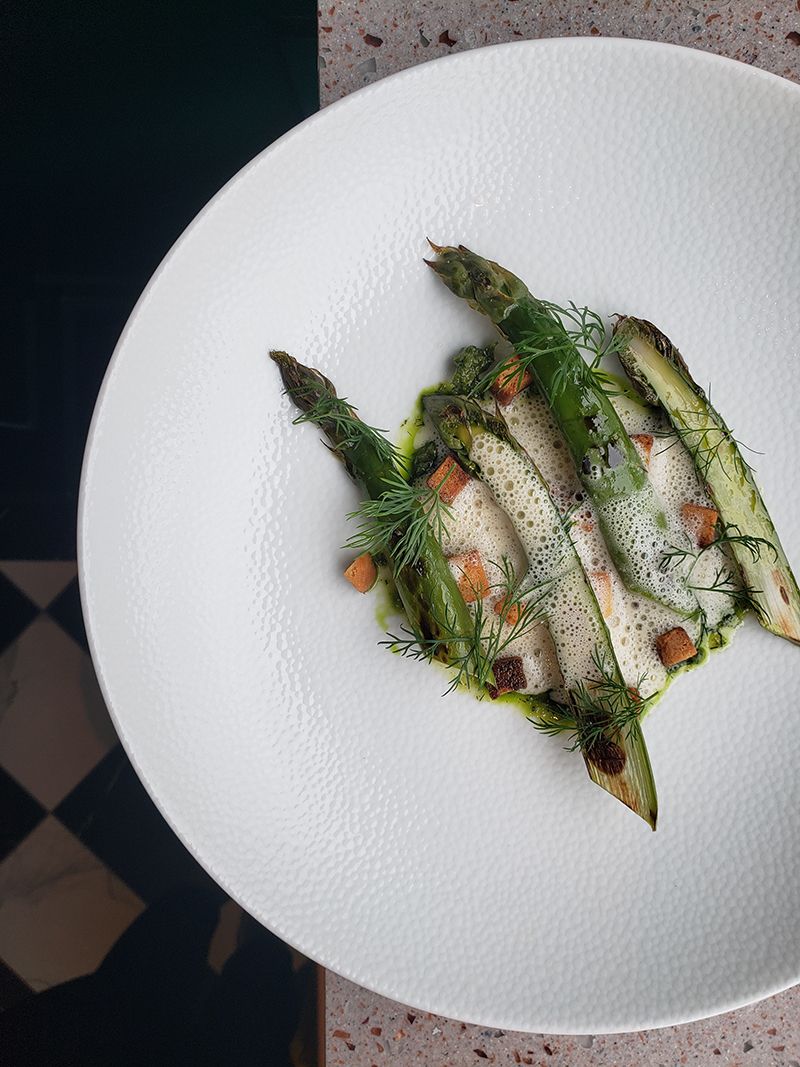 Much of what we ate was very good. Gnocchi (€12) with seared oyster mushroom, anchovy emulsion and soft egg was a small but generous plate of solace, even if the egg white was just on the wrong side of soft. A wedge of Durrus with piquant plum and apple chutney (€9) was confident in its simplicity. Gariguette strawberries and sour cream were cleverly topped with a nutty, finely ground black sesame crunch (€9).

Most dishes, however, were a notch up again. A beautifully balanced dish of poached pear set the bar high, scattered with coarsely grated cured duck liver that was both luxurious and light (€7), accented with chiffonade of chicory – and gorgeous with my off-dry Markus Molitor ‘Haus Klosterberg’ Riesling (€7). 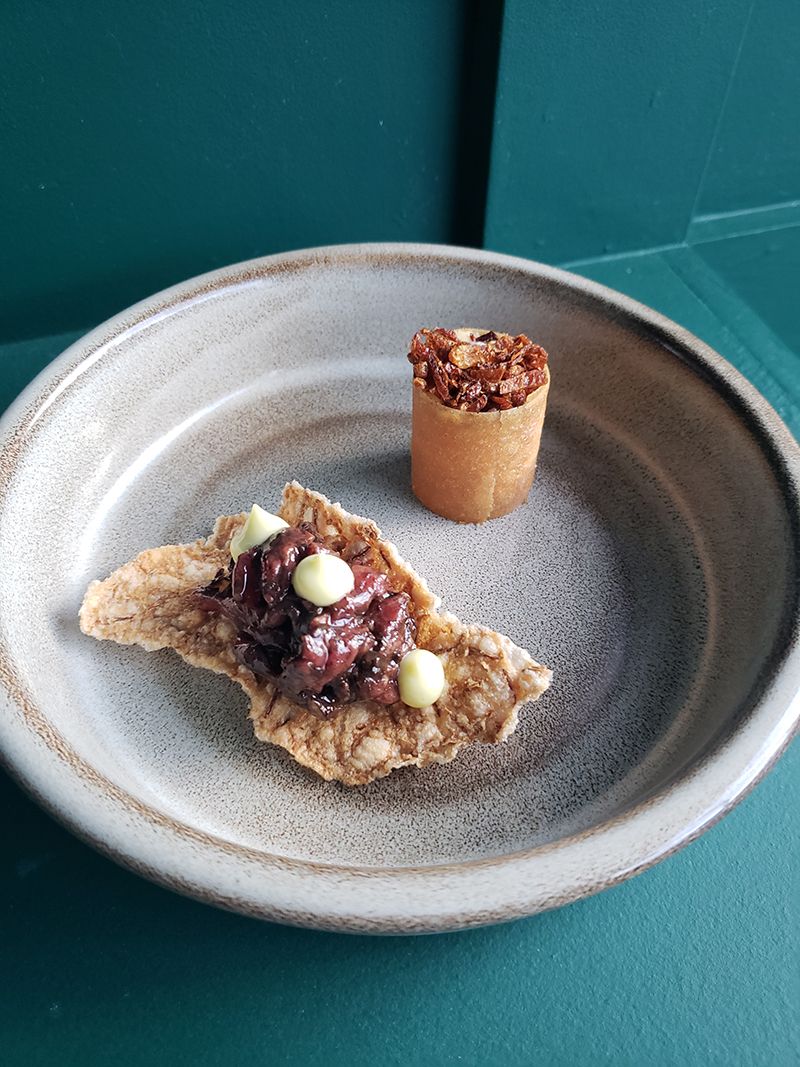 Another small plate arrived shrouded in a pale fluffy ham velouté through which seared scallops emerged like a landmass out of coastal mist, sitting atop sour cabbage (aka sauerkraut) and juicy golden raisins (€14).

And our favourite: delicate duck hearts cooked with a light touch and served with pan-fried violet artichoke hearts and bags of flavour from a hazelnut crunch, herb oil and black garlic paste (€15). This was a beautiful match for our summery reds (both €8): a supple Saumur-Champigny Cabernet-Franc and lively Mencia-based blend from Silice in Galicia. 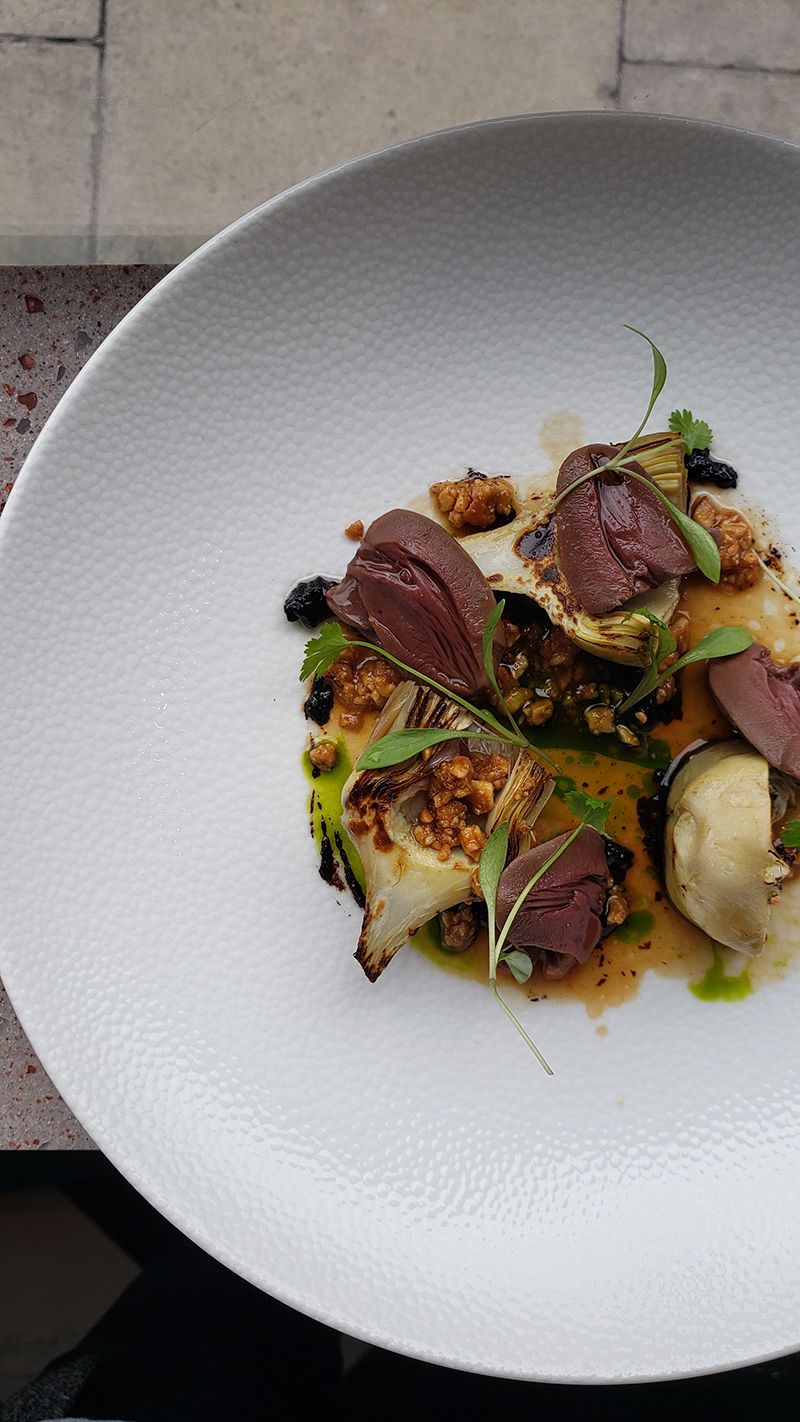 By the time we had paired dessert and cheese with a honeyed Chateau de Navailles Jurancon Moelleux and fortifying Taylor’s 10-year-old tawny port (a steal at €4.50/€5), we were fully transformed and ready to float out into the night, buoyed by the metamorphic marriage of top-class food, wine, conversation and cocoon-like ambience.

There’s a streamlined intelligence to how Frank’s team have unpacked what a wine bar or restaurant might be, keeping certain elements (talented staff, sound sourcing, a strong aesthetic) and losing others (a time-consuming booking system, superfluous employees). They’ve incorporated clever design features like under-counter coat hooks and USB points, and dispensed with unnecessary drains on resources: you drink from the same wine glass all night, which they’ll rinse on request. I’d love to know more about the provenance of what we were eating, and I did leave smelling like I’d been hanging out in a restaurant kitchen. But how refreshing to see this bold take on how we might eat and drink, and how comforting to know it’s there for those days that beg for a cocoon to retreat into.

The bottom line: We spent €120 before tip for the equivalent of a three-course meal, with wines to pair – but you could grab a snack and tipple for a tenner.