The FOOD&WINE Awards: A look back in time 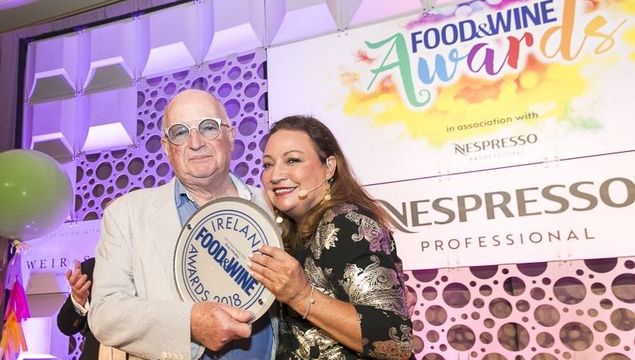 With our 18th annual FOOD&WINE Awards celebrated, we asked Chairwoman Emeritus, Norah Casey, who launched the event back in 2001, to share her favourite moments from over the years.

"There are some real stand out moments for me over the past 18 years. I will never forget the first one in 2001. With a few months of taking over FOOD&WINE we held the first awards and at that time the awards ceremony was the first of its kind in Ireland. It was on a Friday lunchtime upstairs in the old function room at The Shelbourne Hotel for around 100 people. Kevin Thornton came along with his son Conor (very young at the time) and scooped both the Chef and Restaurant of the Year Awards for Thornton's (which was located on the Canal at that time where Locks is now and with two Michelin Stars)." 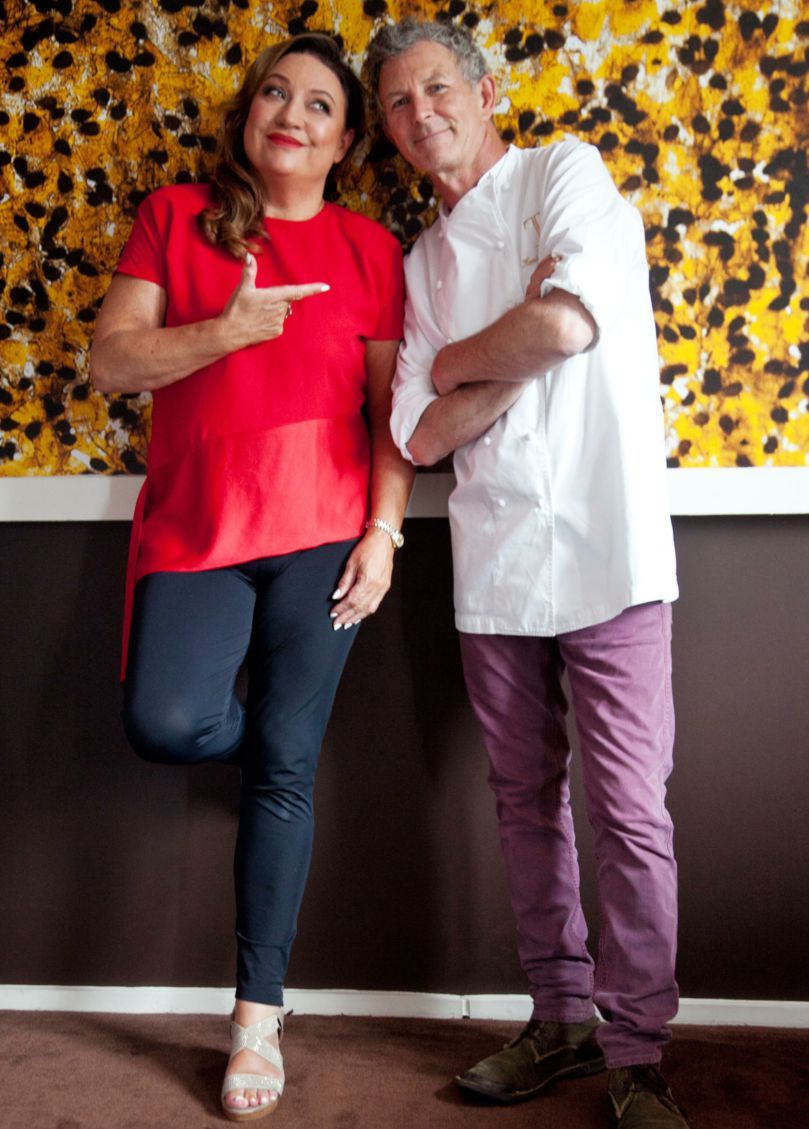 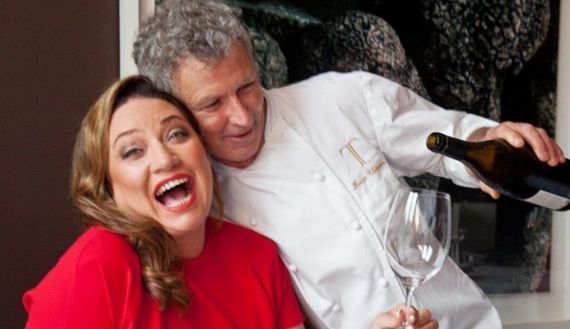 Norah having some bubbles with Kevin

There were only a handful of awards that first year and when Peter Caviston took the award for Best Seafood, he promptly took the mike and began to sing to the crowd until I wrestled it away from him. He was definitely the entertainment that year. It was not a patch on the spectacular awards that FOOD&WINE showcases now, but it was the start of something special and the first celebration of Ireland’s great culinary leaders. 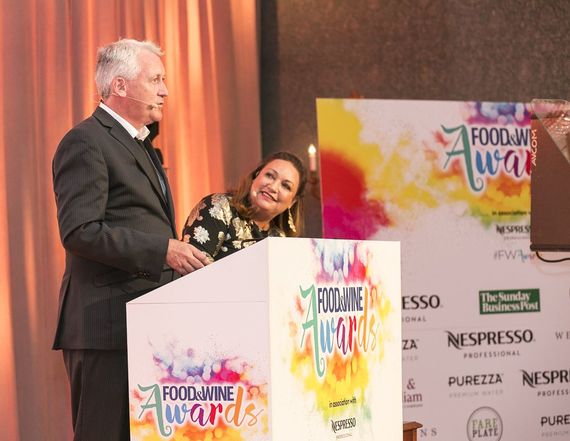 The second year, I asked Joe Duffy to co-host and the following year Brian Dobson. It was a few years later, we settled into a more comedic route and invited Barry Murphy (aka Gunther) to co-compere. When I introduced him as a world-famous chef from Germany, the restaurateurs didn’t know what to make of him. Some of them thought he really was this crazy German chef even applauding him. Only later, when he took off the wig, did they get the joke. Now he’s a regular star of the awards.

In the early years the awards were dominated by the great giants of the culinary scene at the time, Guillaume Lebrun, Restaurant Patrick Guilbaud, and Patrick himself set the standard for others to beat. Derry Clarke was making significant waves with l’Ecrivain and scooping restaurant and chef awards.

But in 2004, an unlikely winner emerged when Ross Lewis took the award for best chef and best restaurant. It was quite a moment when he took to the stage not once but twice, having battled away virtually unrecognised for 10 years at his (now) destination restaurant on Parnell Square, Chapter One. He received his Michelin Star in 2007, but it was a pivotal moment for me in 2004 in understanding how important it was to hero these great champions of Ireland’s burgeoning gastronomic scene. Ross went on to win the top award seven times in the following years and he is still more often the one to beat. 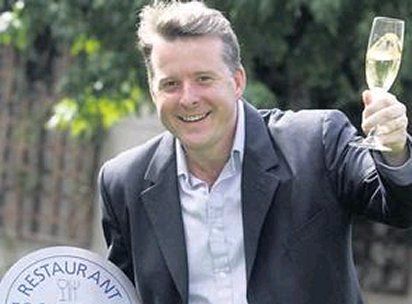 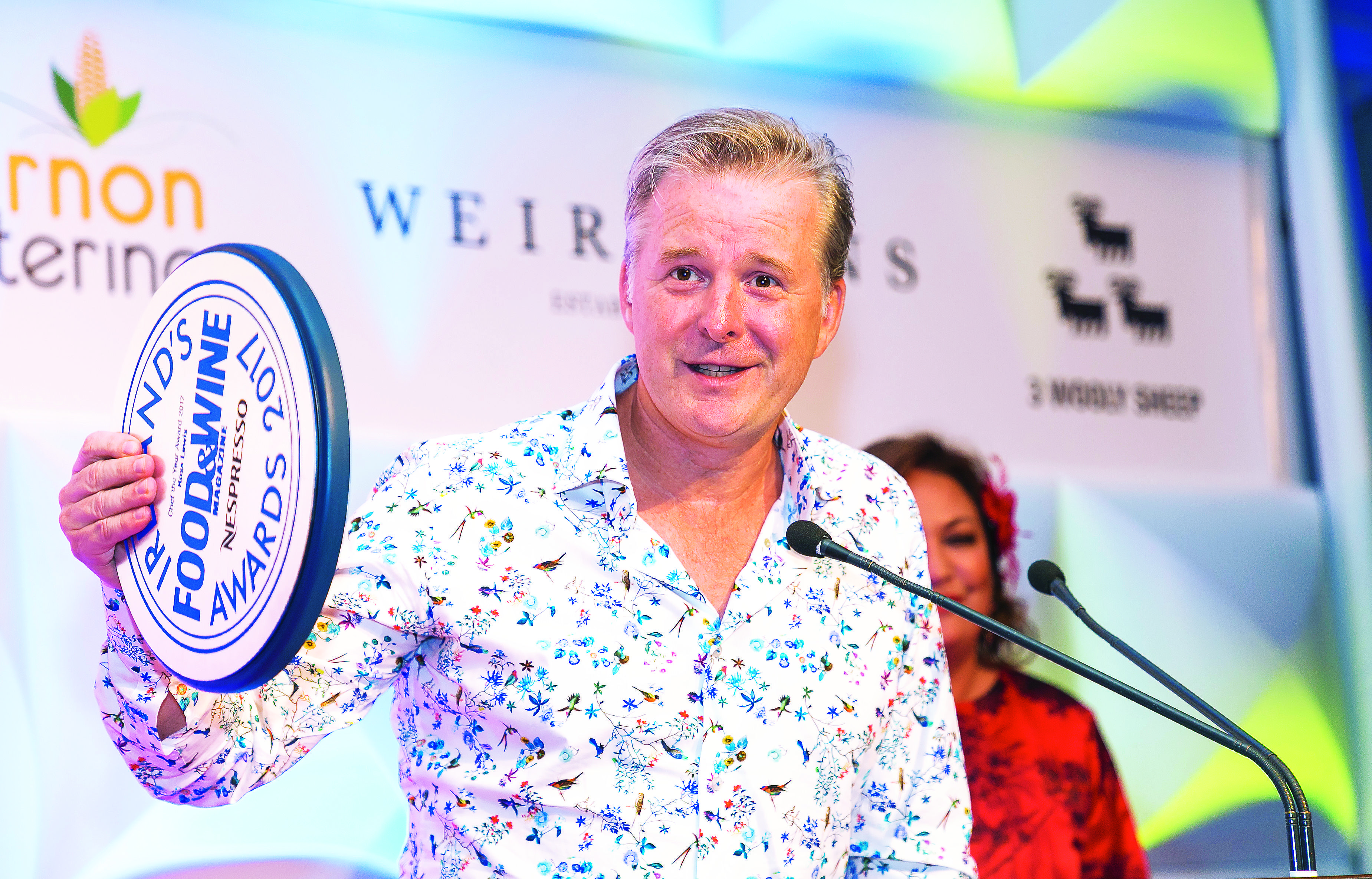 When the grandfather of the chef world, John Howard, entered the Hall of Fame in 2007, he took the house down with illicit tales from the Coq Hardi, which are unrepeatable here. I remember Myrtle Allen’s entrance to the Hall of Fame in the first year, more so than anyone, because she was such a food hero of mine and having so recently left this world, I have thought a great deal about her immense contribution in what is still a male dominated space. Even in the final decade of her life she continued the good fight to preserve and protect our food heritage. Back in 1986 when a group of Europe’s top chefs founded Euro-Toques she was the only woman, not only spearheading the branch here in Ireland, but serving as the International President from 1994-1997.

When she took to the stage she spoke with such great passion and determination about her life as a ‘kitchen entrepreneur’ through to the thousands of alumni that she influenced globally. Of course, she said it with such humility and humour only thumping the podium when she spoke out about the need for gastronomy to return to its roots – and by that she meant supporting local small food producers. 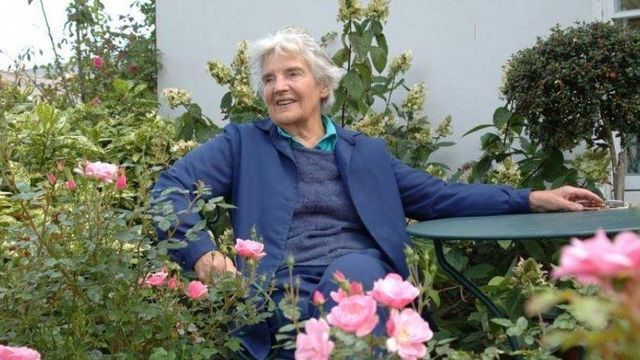 In 2008, there was a break in the Michelin star dominated winners when Neven Maguire received the top accolade of Restaurant of the Year for MacNeans House & Bistro in Cavan. In a very moving speech, he paid an emotional tribute to his parents Joe and Vera Maguire who were forced to close the restaurant for a decade after it was bombed in the 1970s by loyalist paramilitaries.

Neven’s restaurant is on the border in Blacklion and the blast virtually wiped it out. In 1989, the doors reopened again and Neven’s interest in cooking emerged. You could have heard a pin drop as he spoke about the toughest of all journeys to create his hugely popular destination restaurant in a village of 300 people that had been hit so hard during the troubles. 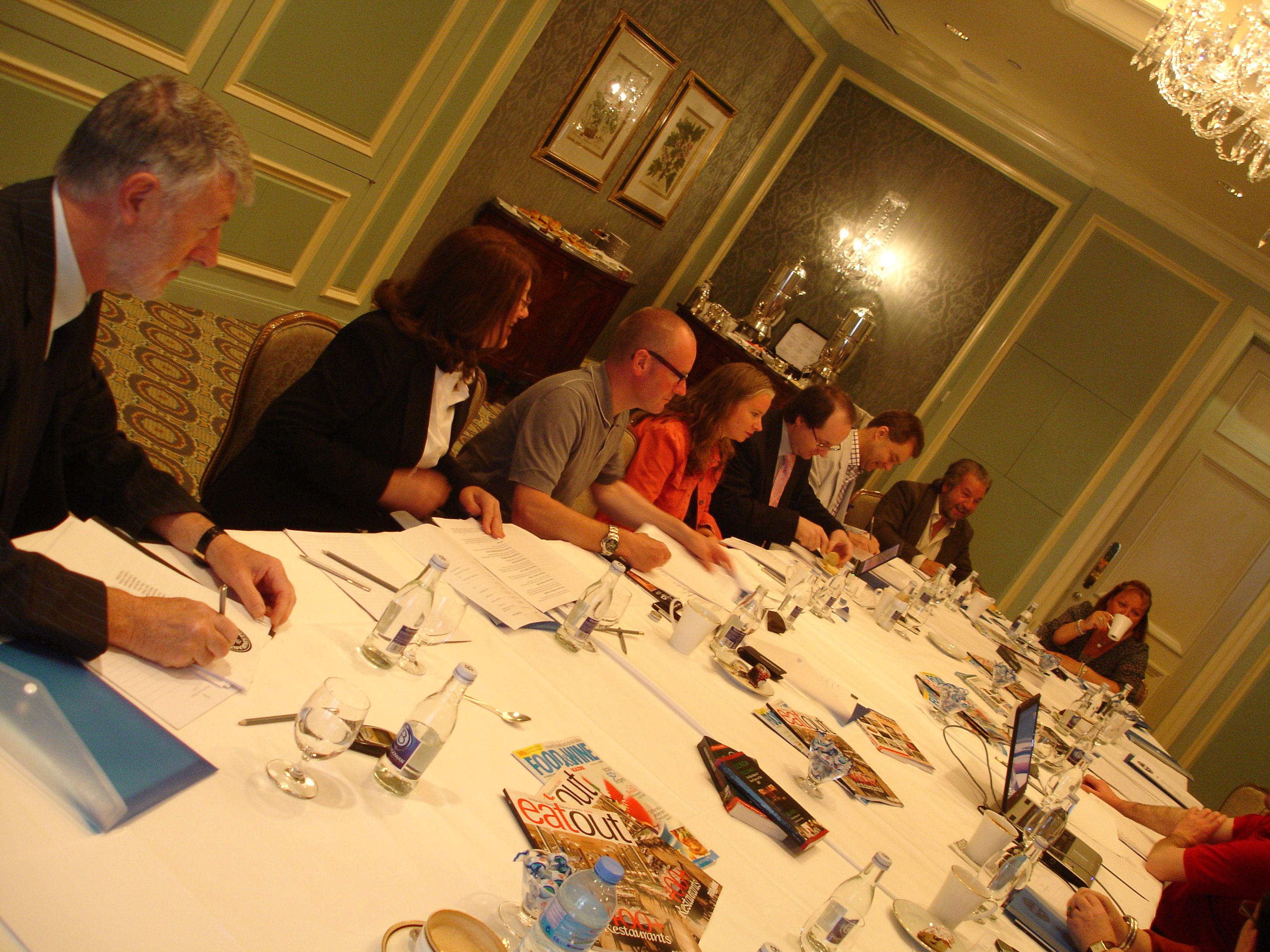 Paolo Tullio and other judges on the panel

It was also immensely sad to say goodbye to Paolo Tullio who was the best fun, the most argumentative and the heart of the judging panel since I started the awards in 2001. He died just a couple of months before the awards in 2015 and that year another amazing woman, Biddy White Lennon was entered into the Hall of Fame. Biddy was a rock of sense and one of the most accessible food writers with a knack for interpreting overly complicated chef recipes for us amateur cooks. As a great actor she transitioned from being ‘Maggie’ in The Riordans to being an accomplished author and wild food expert. In 1990 she joined fellow food writers to found the Irish Food Writers’ Guild. 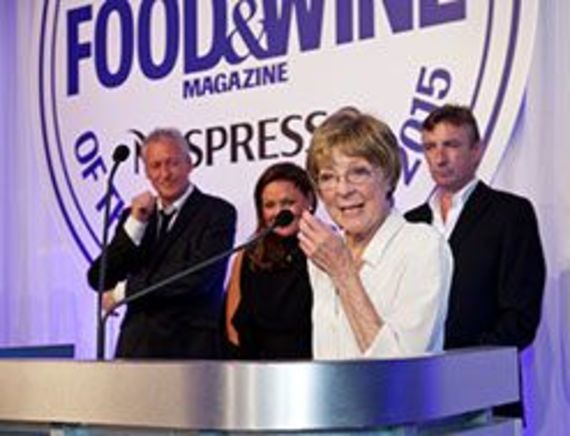 At the time of her citation at the Awards she had published 13 cookbooks including her Best of Irish series of books a treasure trove of food related folklore and customs as well as wonderful recipes. As we headed towards the judging in 2016 Biddy called to say she wouldn’t be able to make it along as she was ill and back in hospital. We missed her that year. Sadly, she passed away in November 2017 and while much of the footage was about her great work as an actor, with clips from The Riordans, I spoke about her on RTÉ news that day to encapsulate the very special contribution she made to our food heritage. 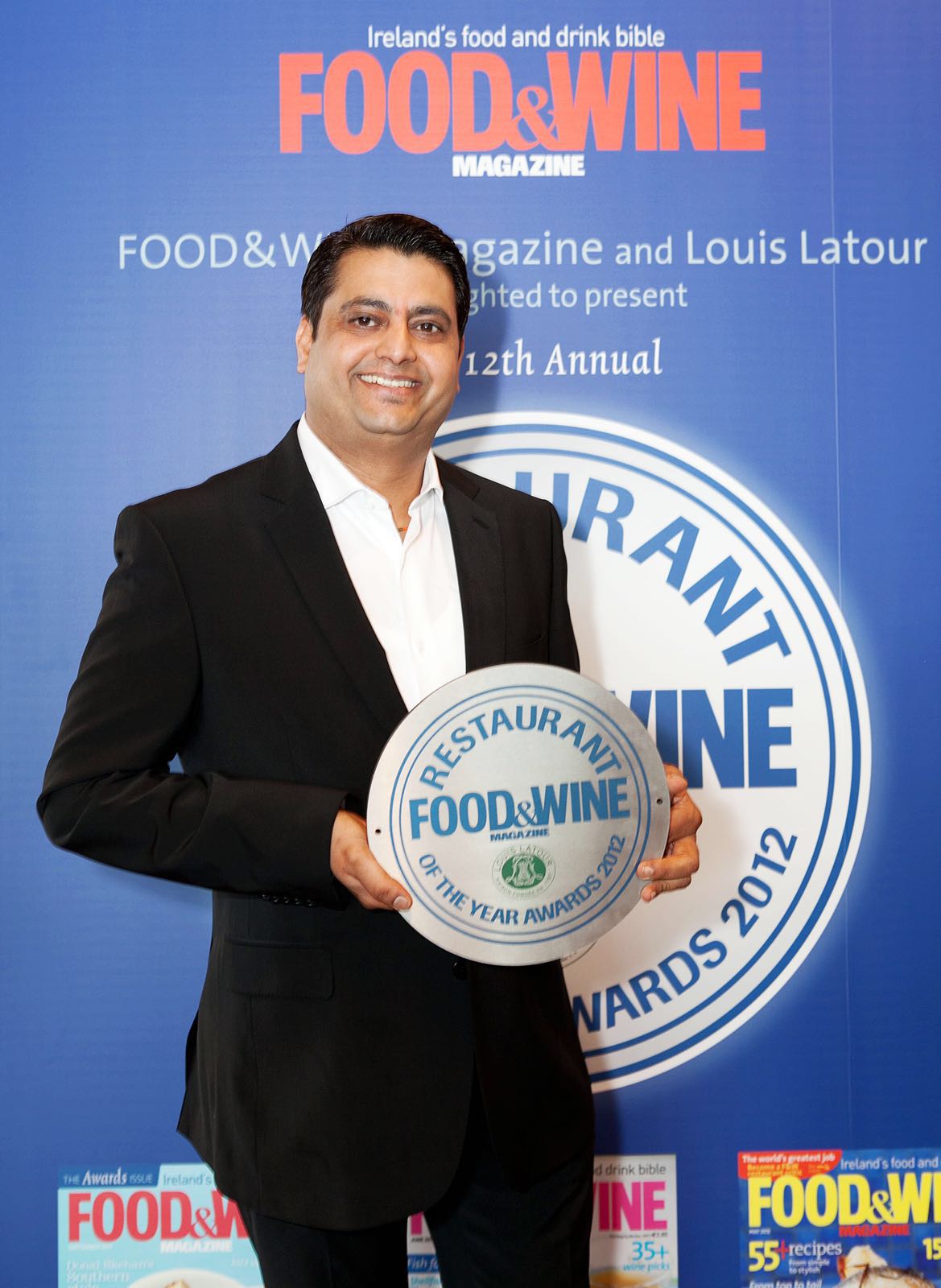 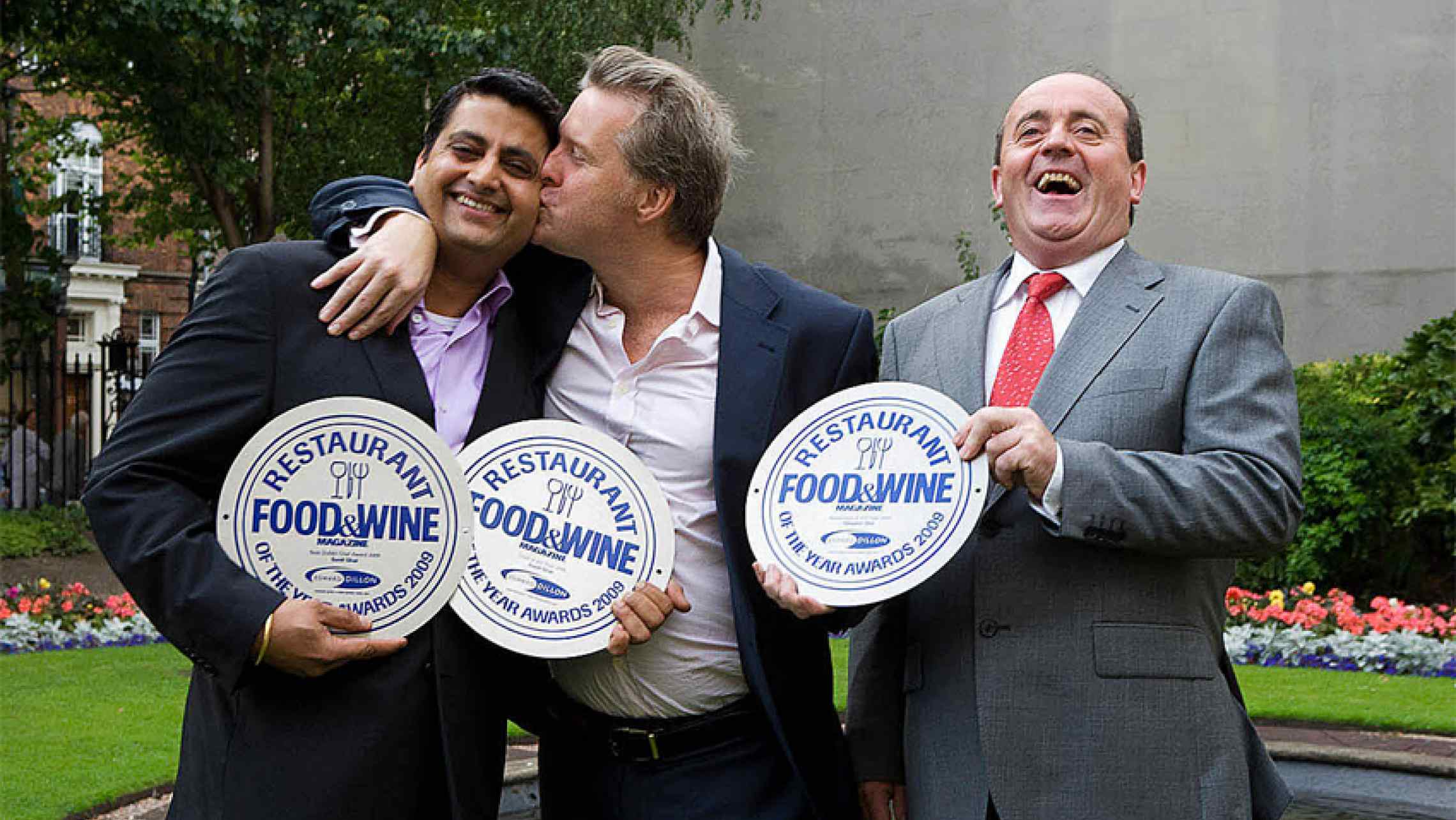 When I look back over the years of the awards I can see how some of the great restaurants in Ireland rightly dominated the top awards but one award winner stands out. Having taken many of the awards for chef and restaurant in the ethnic food category, Sunil Ghai was finally awarded the top spot – overall Chef of the Year in 2009. It was a real breakthrough and richly deserved for one of our most talented chefs (at the time in Ananda and now with his own restaurant Pickle in Camden Street). It was a moment of great pride for him and his team and a testament to his tremendous hard work to push the quality of his cooking to the highest standard. Those are the years I feel when we made a real difference. 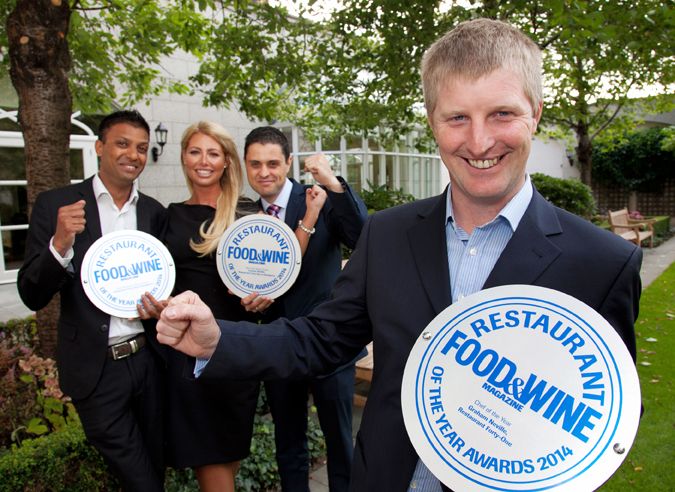 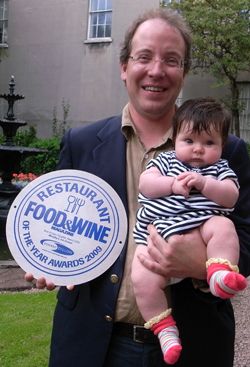 In 2017, we celebrated 20 years of FOOD&WINE and we revolutionised the awards. Having been a trailblazer in the early years in terms of seeking out and shining a spotlight on amazing chefs and restaurateurs we were now just one of the pack.

As always, you only swim in uncontested space for a period of time and before long others follow along and I was conscious we were all giving the same awards to the same culinary stars. And yet the food movement in Ireland had changed radically and great food was appearing in pubs, casual eateries, pop ups and in local towns. We needed the awards to reflect that and so our colourful contemporary logo was uncovered along with a plethora of new awards to ensure we were continuing to shine a light on the best where ever it might be. And while we all know that food lovers choose where and when to dine based on what they wanted at that moment in time the awards previously had tended towards only the fine dining space.

So not only did we introduce awards for great pub food and best local we also added in other special awards such as best for brunch (a hotly contested space), best for romance, best for wine lovers and best hotel restaurant. 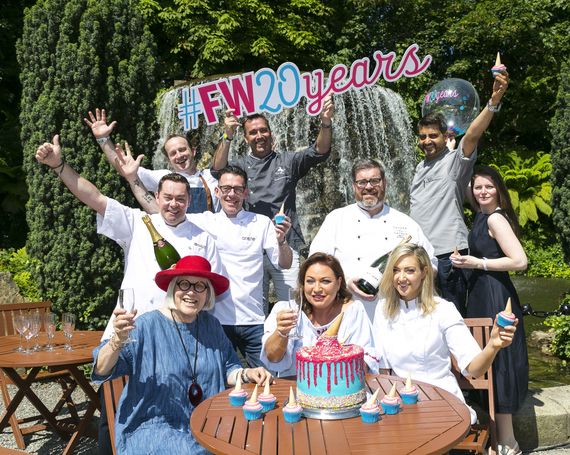 Of all of those great moments and many more, I remember 2011 the most. It was Richard’s last award ceremony, and we both knew it. He loved FOOD&WINE more than any other magazine in the stable and over the years the chefs and restaurant owners have become good friends to both of us. Everyone in that room knew he wouldn’t be with us much longer, many of them had cooked for him in the previous couple of months as he battled with the aggressive spread of the disease. He was in a wheelchair at the time as the cancer had spread to his spine and we had only recently been told that the end was inevitable. It was one of the hardest things to do to compere that year, but I had Barry (Murphy) by my side, he and his wife Flo were close to both of us.

It was magical to see Richard laugh and chat to all of our friends from down through the years. We left as soon as the ceremony was over, Richard was exhausted. As I was settling him into bed the door bell went and there was Barry, Flo and all of our close friends bringing the party back to him. It was a beautiful and memorable night.