Everything you need to know about this delicious vegetable.

When November arrives, it brings a bounty of amazing produce with it, including cabbage, which are one of our favourite seasonal ingredients.

In our What's In Season Guide For November, we took a look at the various ingredients that are at their best right now. Cabbage is one of those ingredients, so full of flavour throughout November that we can't help but want to use it in nearly everything.

Cabbage is a member of the brassica or mustard family, which also includes broccoli, brussels sprouts and kale. All of these vegetables are descended from wild cabbage which originated thousands of years ago.

Brassicas were originally named cruciferae by Europeans, as the interior flower pattern was thought to resemble a crucifix. Other names through the ages, including Middle English names, old French names and Celto-Slavic names, were all thought to have been derived from a variety of words that mean 'head' in the various languages; perhaps this is why we refer to it as a head of cabbage.

There are so many different types of cabbage that it is often difficult to decide which to use, but we've listed some of our favourites for you below so that you can try each one while they're at their best this November.

Green cabbage is probably the most well-known cabbage around the world. It has lots of smooth green leaves and is full of vitamins and minerals. It's a very versatile vegetable that can be cooked in a multitude of different ways, including steaming, frying and more.

Savoy cabbage is similar to green cabbage but has ruffled green leaves instead of smooth, similar to kale. It is far less tightly packed than other varieties of cabbage and is extremely tender. We love savoy cabbage when sauteéd, braised or quickly stir-fried.

Red cabbage is a tightly packed, bright purple head that feels heavy when lifted. It's difficult to separate the leaves so it is often served shredded or thinly sliced – it's a big favourite is coleslaw. Red cabbage usually takes quite a while to cook out sufficiently and can often turn an odd blue colour when cooked; to stop this happening simply add some lemon juice.

Also called Napa cabbage or celery cabbage, Chinese cabbage doesn't look like other cabbages, as it has long leaves with white stalks. It has a slightly peppery flavour that adds a good kick to any dish. It is commonly used to make kimchi.

Cabbage is a really versatile ingredient and we absolutely love cooking with it. We have heaps of recipes involving cabbage on the site but some of our favourites include Rob Krawczyk's pork with fermented cabbage and apple, Alex Petit's five-spice pork belly with cabbage frisée, Blathnaid Bergin's carrot cabbage and hazelnut salad and this bacon and cabbage stuffed quail from Gary O'Hanlon.

12 of the best early bird menus to enjoy this January 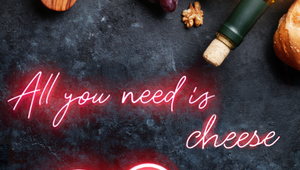 Love is in the Gruyère: Join us for a Galentine’s evening of cheese and wine

This West Cork retreat is perfect for budding food writers