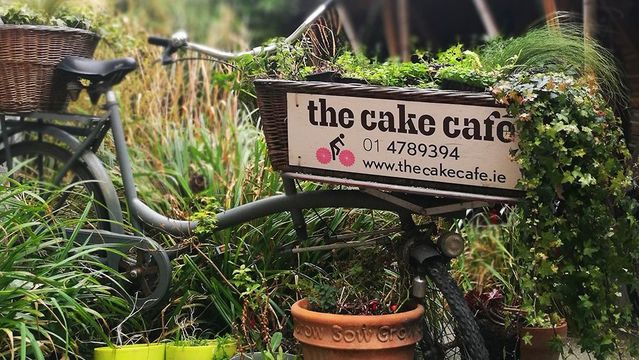 The Cake Café is one of Dublin's most-loved hidden gems and since owner Ray O'Neill has re-enlivened the space and menu, it has attracted even more of the grá from locals and tourists alike.

Tucked away at the back of The Last Bookshop on Camden Street, The Cake Café is a sort of oasis off of the D2 thoroughfare. It's home, The Daintree Building, is an anomaly in the urban district it resides, which can be accessed from another entrance on Pleasant's Place. Built in 2005, it was once called Ireland's most sustainable apartment building and comprises of a holistic mix of apartments, offices, craft space and, of course, the café.

Ray O'Neill was inspired to quit his job and work at The Cake Café in 2010, at the time owned by Michelle Darmody, after completing a three-month course at Ballymaloe Cookery School. The café serves breakfast and lunchtime food, made from quality ingredients from local Irish suppliers, with an emphasis on the bakery, and a large cake menu to boot.

"I started here as a chef, roughly eight years ago. I was working with Jasper who trained me in and then I took over from him. There were a lot of things going on at the time, it wasn’t just cooking, we were putting the Cake Café Cookbook together, for example. When Michelle decided to take a step back, I started managing the place as well." 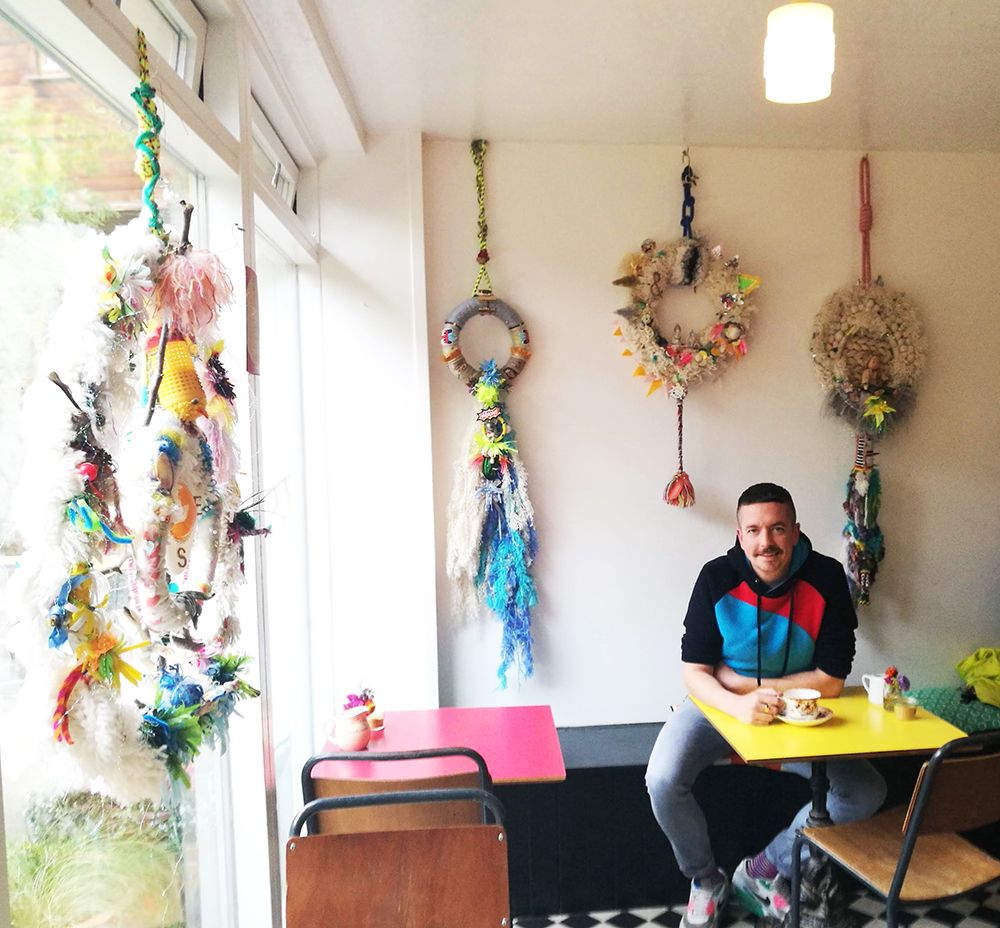 A Slice of Cake Café

"The story kind of just went from there; Michelle and I were looking at doing something else, in Stoneybatter, which resulted in opening up Slice there, which was five years ago, nearly. That’s been like a whirlwind over there, the difference we’ve seen in those few years has been unbelievable. The population of young professionals in Stoneybatter has grown so much that it has resulted in the number of amazing spots for food. That’s what great about it and where it’s slightly different to here [Cake Café], Slice is slap bang in the middle of a neighbourhood. It has such a great community around it."

"Slice definitely has elements of The Cake Café, I mean it was always supposed to be: 'A Slice of Cake Café'. We sell all of our merchandise over there and we did bring a lot of our recipes over, dishes like our beans on toast and eggs and soldiers. While there’s definitely a connection between the two, it has definitely turned into a place that stands on its own too. It has its own identity now. At the start, a lot of customers came because of the association with Cake Café, but it has a loyal base now and new people popping in all the time." 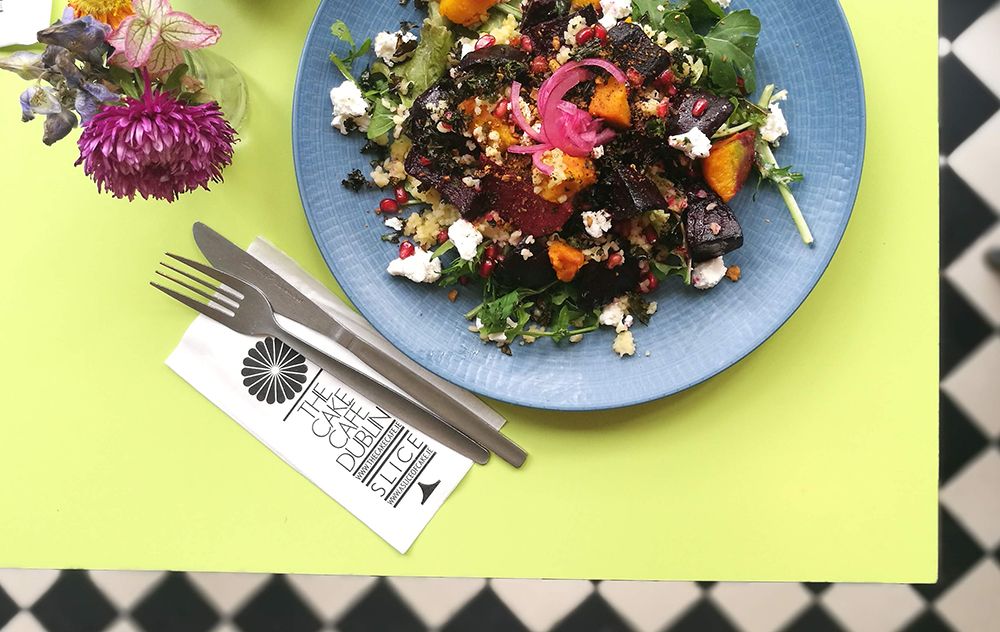 "Michelle was in the business 10 years and she made her decision that she wanted to go back to get her Masters. I suppose she was so comfortable with me and knew me because I had run Cake Café and Slice too, that she comfortable at the thought of me taking over the two of them completely. It just kind of worked for both of us, I was looking for a new challenge at the time."

"My vision for the cafés is definitely the same ethos as it has been. The ethos has always been supporting small producers – Jenny McNally (McNally’s Farm) emails me every Wednesday and we put an order in for that Friday and base our menu, our soups and everything all around that; her produce is just phenomenal."

"So we will always keep that ethos, supporting producers and using as many local ingredients as we can. I can’t stand when I go into a place and I see foreign vegetables, honestly, I just don’t see the need for it. I just don’t get it. I know sometimes we don’t have a huge choice in the winter months, but we do have amazing produce in this country. There will be certain vegetables that obviously have to come from afar as can’t grow them here, but that’s different. If we can grow it here, we should try to buy Irish, as much as possible."

"We also work really close with Lilliput Stores, right beside us in Stoneybatter. They are great guys to work with. We do a dish, classic Portuguese sardines on toast, which we get from them and their cheeses are amazing too, and speaking of cheese, Sheridan’s have also been a great supplier of ours too." 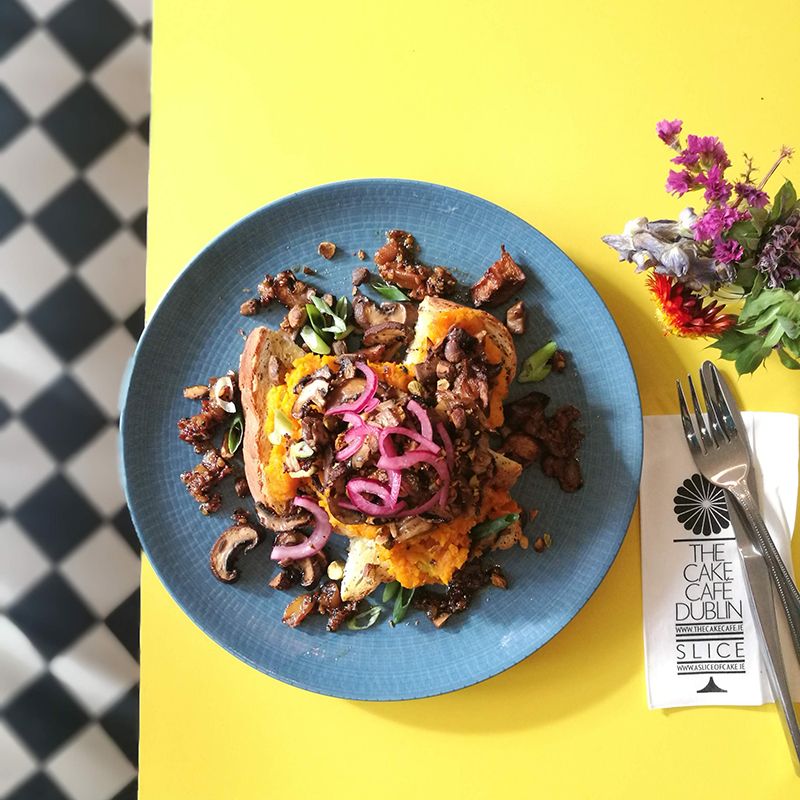 Putting your own stamp on it

“When I took over initially, I suppose I wanted the changeover to be very gradual, especially for the staff and everything. I didn’t want to come in and say we're changing this and that. There was also an element of ‘why fix it if it's not broke?’

"But there were definitely areas that I wanted to focus on. The space itself, for example, it’s such a beautiful space... I love seeing people when they come out through the bookshop not knowing where they are going and coming out here thinking, “What is this? How did this come about?” So aesthetically was one element I wanted to focus on and put my own stamp on."

"I focused on the garden first. We put a pallet on the wall and made it into a herb box that the chefs use all the time. Inside, I really wanted to give even more of that wow factor and use the space more. A friend of mine, Fiona, is exhibiting her work on the walls now... her ‘life wreaths’ are hanging up. The story behind them is that she had cancer, and when she was given that information and told she didn’t have long to live, she created these stories of her life into wreaths. People always associate wreaths with death, so these are really cool as they celebrate life. She’s a really inspiring person to meet and someone who I’ve become good friends with. I think it’s such a lovely thing to have in the café because there is a story behind each one. They are so unique too. People love them."

"From a food perspective, as I said before, I didn’t want to move away from the ethos of what we have here, I suppose that’s why I came to Cake Café in the first place. Michelle and I have the same ethos and values. I didn’t want to change any of that and I haven’t changed anything of that, but I have tried to bring some of the dishes more up to date and try to be more ‘on the money’ about little things."

"We are still working really close with Jenny McNally and any of our monthly specials still have several elements of her stuff in there. I really wanted to work closely with Jenny and sit down with the chefs and try to do something with some of the vegetables that she has that are a bit more far-out there, that you wouldn’t see any other growers doing. I wanted our team to find a purpose for this veg cause it is so amazing."

"I brought the chefs out to her farm recently and we did a full tour. I wanted them to really feel for where everything is coming from, and not that they didn’t before, but so they can get more of a sense of value for how long things take to grow and appreciation for it. Like, for example, she is planning to have sweet potatoes in the next year or so, which is a really long process, to get to the stage of producing it." 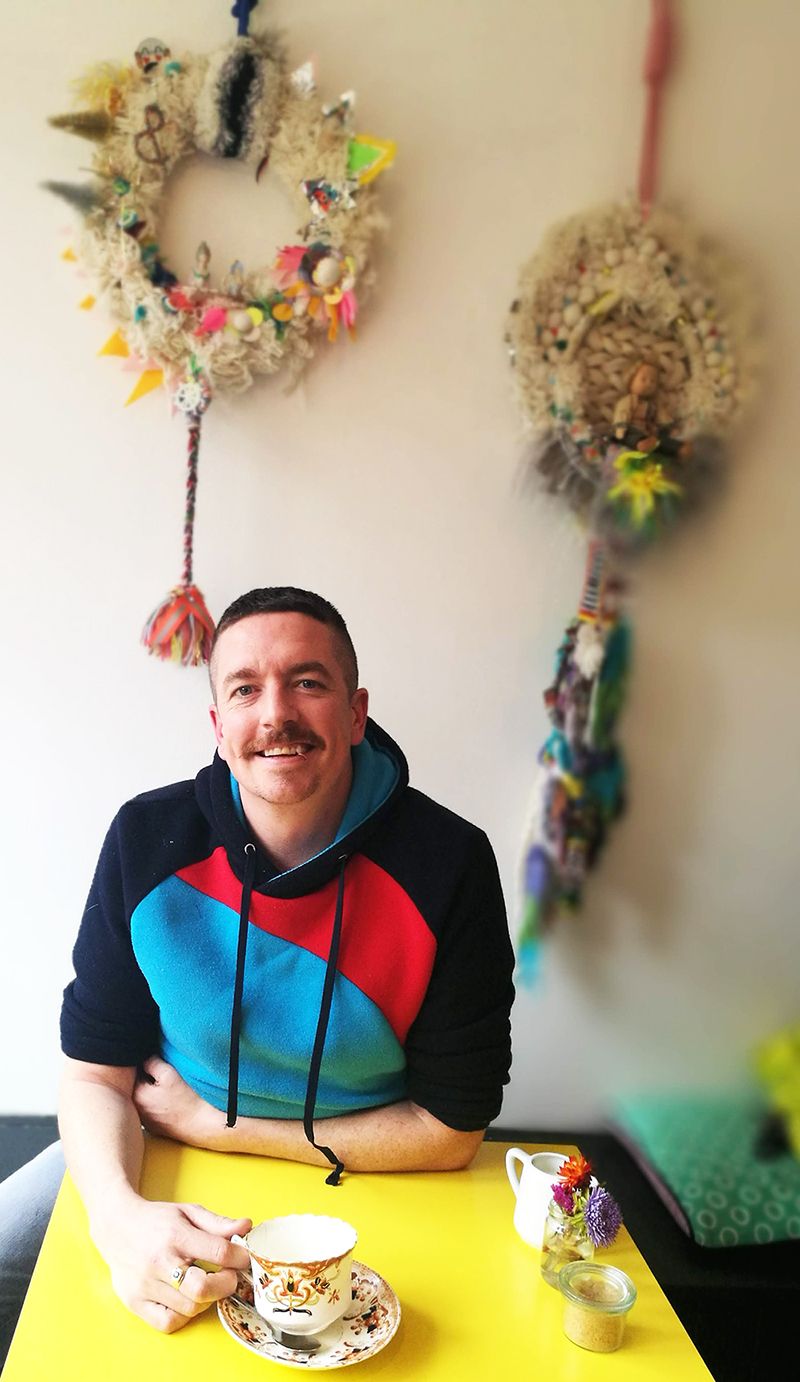 "Cakes are still hugely important to us. We have a specific type of customer who comes in and eats cake. It is kind of the ‘bread and butter’ of the business. We get a huge amount of tourists coming in for cake every day of the week, thankfully, as we are in most guide books. We’d always have six or seven cakes on the bar at all times. We will always have the classics that will be on the bar that we can’t take off the menu, or don’t want to, like the Victoria Sponge Cake, with homemade jam and cream, and Belgian Chocolate Cake. The most popular is the Lemon Yoghurt Cake."

"We are always trying to innovate and do new things here. We’ve started doing monthly specials last year, so we have two standout specials, obviously along with changing soups regularly and different kinds of toast. But for the specials, we really hone in on getting the recipes top-notch before the end of the month so everything is ready to go for the beginning of the next month, which is fun and it keeps it exciting."

"It’s the same for the bakery, always trying to do as many different recipes as possible. For example, I’ve never seen such a surge in the popularity of veganism – wow! We used to do maybe one vegan cake every month and now we are probably doing four or five a week on order, due to demand. We started to do specialist ones like the Vegan Chocolate Cake and Coffee and Walnut Cake."

"Orders for cakes comes under the umbrella of outside catering. We have a huge amount of people ordering birthday cakes, christenings, and wedding cakes have become really popular. For those, we try to always go to the venue and set it up for the wedding. Nude cakes are becoming more and more popular for weddings instead of the traditional."

"I do a lot of baking classes here too, probably once a month and then coming up to Christmas I do a series of Christmas classes, which is really popular and there is space there for parties too."

"There has definitely been a change in the popularity of certain types of cakes, we’ve seen a huge change in what’s trendy, for the better I think."

All the love vibes going on this week with these stunning vegan brownies that are also gluten free and super delicious!! Give us a shout if you would like to order cakes for your office or home!! #getinvolved #vegan #veganbrownies #vegandublin #veganfood #glutenfree #wheatfree #camdenstreet #thecakecafedublin #thecakecafe #dublinstagram #instafood

Have you been to The Cake Café? Let us know how it went in the comments below.