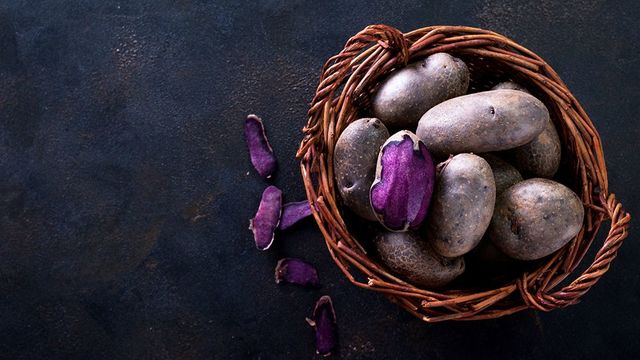 Maria Flynn of Ballymakenny Farm in County Louth is well-known for vivid purple potatoes, but this wasn’t always the case.

In 2007, Maria and her husband David, a second generation potato farmer, took over the family farm and realised they were in bad shape: The farm was struggling and Maria knew that only growing rooster and queen potatoes wouldn’t keep them above water. She retreated to, as she called it, “her happy place” which was food.

While speaking to a food producer, Maria realised that there were plenty of vegetables that weren’t grown in Ireland and had to be imported. This sparked an idea and Maria decided to start growing for food service, instead of the wholesale supermarkets that she and David had been catering their product to.

Fridaaayyyyyy..our gorgeous potatoes can still be ordered for delivery tomorrow give your wholesaler a buzz go on, go on, go on. Happy and busy weekend to you all #spudlove pic.twitter.com/Ggy9hvPJA8

As the farm’s infrastructure was already suited to potatoes, Maria realised that she would have to stick with them, but wanted to try something different, which was how she came up with the idea of growing purple potatoes:

“I asked David to plant me some and we ended up with nine tonnes of them, so I knew we needed to sell them. Irish people hadn’t really heard of them, but chefs knew about purple potatoes, so I started to reach out to them via social media. The farm’s massive growth is really all down to social media as I started posting on Facebook and Twitter about the potatoes, which got chefs interested. They love that they can get an Irish-grown purple potato and the feedback has been really positive. In the five years that we’ve been growing the potatoes, the farm has completely turned around.”

Any of you heading to check out the new @avocaireland in #Ballsbridge don't forget to pick up some of our potatoes for a treat pic.twitter.com/nKfFW6ZoPL

When the business started to grow and become more popular, Maria and David realised they needed to invest in tractors to harvest the potatoes. When looking for a way to finance their new purchase, the pair were recommended First Citizen Finance, which turned out to be a match made in heaven for Maria:

“I’m a wife, a mother, a grower and more, so I’m very busy. That means it’s crucial for me to be able to pick up the phone and contact people, which is why First Citizen Finance was such a perfect fit for us. Once the business became truly viable, we realised we needed a way to transport the potatoes as the car boot wasn’t an option anymore. We needed to invest in a van, so it was great to already have a relationship with First Citizen Finance that we could take further to purchase the van. Our business is growing so much, that it’s great that we already have a relationship with a finance partner that we can continue to grow with.”

Want to know more about getting an excellent finance deal for your new motor purchase? First Citizen Finance can help.