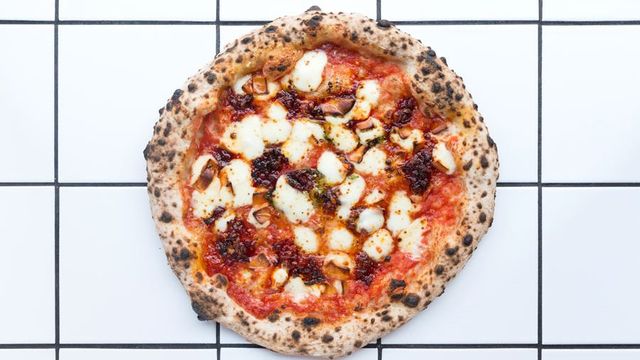 You might have heard of a little pizzeria on George’s Street that has turned the capital upside down with its stellar wood-fired pizzas. Well, now it’s not just Dubliners that are rating Pi as one of the best, as Big 7 Travel has included Pi on their list of Europe’s 50 best pizzas.

Pi has created quite a stir within the Dublin food community since opening its doors less than a year ago. Trained at Ballymaloe Cookery school, co-owner and Head of Pizza Reggie White is obsessed with making perfect pizza, using Tipo 00 flour to create his pizza dough, before finishing it with a range of high-quality ingredients, including Toonsbridge mozzarella and Gubbeen chorizo. Each pizza is then cooked in a 500ºC wood-fired oven to create distinctive charred blisters on the crust.

Since opening, Pi has been attracting massive crowds and it’s not uncommon to see the queue of people clamouring for a pizza spill out onto the pavement. Obviously Big 7 Travel, a website that highlights authentic spots to visit around the world, took notice as their recently released list of The 50 Best Pizzas in Europe named Pi as the seventh best.

According to the Big 7 Travel website, the judges thought that pizzas from Pi had remarkable flavour:

“They call themselves “wood-fired pizza fundamentalists” and judging by how wildly popular this restaurant has been since opening you can see people voting with their feet. A buzzy room, some great craft beer and a pizza that tastes as if it landed from another planet in terms of flavour.”

Speaking to us about the wine, Reggie told us how happy he was to see the team recognised for their hard work:

"It's amazing news, really kind of the website to include us. The funny thing about pizza is that it's quite subjective, so we've created pizzas that we like and we've been lucky that people like them too!  We're delighted to be included on this list, the whole team is chuffed. We've tried to build a nice atmosphere in the restaurant, where it's not about me it's about everyone. We hold ourselves to a good standard so it's good to see that we're achieving that. When positive reviews come in, even just Google reviews, I always share them with the staff to let them know they're doing a good job. We're a team here at Pi, it's about all of us and that's why we do so well.

We're open only about nine months now and we've been so busy, the reaction has been better than we expected. We knew that if we put our heart and soul into this business that we would do well, but we didn't expect the reaction we've gotten or the queues we've had out the door every night of the week. We're so happy to be doing so well."

Check out the  top ten best pizzas in Europe below:

Congratulations to the team at Pi from all of us at FOOD&WINE! Have you tried Pi? Let us know how it went in the comments below.