The Great British Bake Off 2019 Episode 10 Recap: The Finale

Spoiler alert: This recap will reveal the winner of The Great British Bake Off 2019!

After a gruelling competition, the winner of the 10th season of The Great British Bake Off was named last night after a challenging episode that saw the three finalists create a chocolate cake, twice-baked soufflés and an illusionary display of bakes.

After 10 weeks, we've finally made it to the end of then 10th season of Bake Off. We've seen highs and lows, perfect cakes and smashed tarts, and much more; it's been emotional. Going into last night's episode, I was sure that Steph would take the crown, but it seemed that the pressure was too much for her in the end and, in a surprising turn of events, David, who had never won Star Baker, was the ultimate winner.

After weeks of bizarre and difficult challenges, the final Signature challenge of this season was a chocolate cake. This task may sound deceptively simple, but this is The Great British Bake Off 2019 finale, so of course Paul and Prue wanted an elaborately decorated, super chocolatey and generally perfect creation served up to them.

David, following on from his behaviour throughout the season, decided to go for a boozy cake which he, inevitably, makes a little too boozy for Paul's liking, though I think that Prue secretly liked it. Attempting a chocolate mirror glaze is no mean feat, so the fact that David could see his own reflection in his cake was quite an achievement, marking how seriously he took the final challenge. Peppered throughout this first challenge was a series of videos starring the contestants and their families, and David's truly highlighted how good of a person he is. Working as a nurse to help people less well off than him, learning to bake in spite of a strict 'food snob' mother and his relationship with his lovely partner Nik show that David is a genuinely nice person. After a season of a slightly protected image, it was nice to get a real look into his personality.

Alice immediately started with panic, creating a spiced chocolate cake with poached pears that she took out of the oven far too early – it was still liquid cake mix in the centre – and, in typical fashion, attempted too much. She went for an on-trend buttercream and chocolate ganache drip cake, but because her middle layer – the undercooked piece – was a bit shaky, her whole cake buckled inwards. Clearly, she didn't have enough time to do her drip properly because it was very thick and clunky, but Paul announced that he quite liked it. Overall, the judges weren't sold on her creation, but I really think that if she'd had more time, it would definitely have been better. Two hours is not enough to create a multi-layered, elaborately decorated cake.

Steph, whose video showed her close relationship with her mum, started out strong by making a perfect-looking black forest gateau, even if Prue did think it looked a bit too 70s. However, Paul deemed the cake a bit overbaked, which immediately worried about Steph's chances at victory. Surely someone who had won Star Baker a historic four times wouldn't be kept down by a slightly overbaked sponge?

A trio of Finalists. Good luck to Alice, David and Steph, you're all winners in our pies  The Final of The Great British Bake Off. Tonight. 8pm. Channel 4. #GBBOFinal

The Technical Challenge started on a positive note, with the judges joking around and hugging each other, causing the tension in the tent to lift and the bakers to burst out laughing. This was so exciting to see as it harkened back to the old days of The Great British Bake Off where things were a little lighter and the tent was a nicer place to be. This, I think, is what was missing this season. The show seems to have lost a little of its heart, so I hope the producers find the missing element and bring it back for next season.

The judges immediately set the bakers a very tough challenge: twice-baked soufflés with lavosh crackers. Steph seemed immediately rattled, a theme which heartbreakingly continued through the rest of the episode, resulting in her crying with Noel after she added cold water to her bain-marie instead of hot and her soufflés didn't cook. Even the stoniest hearts would have cracked a little at Steph's anguish and poor soufflés, which resulted in her coming last in this challenge. It seemed that my prediction that she would win was seriously in trouble at this stage unless she pulled it back in the Showstopper Challenge.

David performed admirably again, creating near-perfect soufflés that saw him take first place. After a lacklustre, middling performance throughout the season, it seemed that David had saved up his skills for the final and really pulled it out of the bag.

Alice came in second, which seemed to infuriate her slightly. Her competitive edge came out in this challenge, but her lavosh was just too thick to pip David to the post.

The Showstopper Challenge in the season finale is always over-the-top and last night was no different. The judges tasked the bakers with creating an illusionary picnic basket where the bakes would look different to how they tasted. Each basket had to be made of nougatine and the judges required three elements – cake, biscuits, bread – that didn't look as they were supposed to. I realise that explanation might be a bit confusing, but the contestants' creations will definitely help to explain the challenge further!

Alice, again, started in a panic. This time, it was because her parents were stuck in Dublin after a flight got cancelled, meaning they might not make it to actually see whether or not she won. Thankfully, they got on a plane at some point, meaning Alice's normal, messy activities could take place. Her picnic basket was filled with near-perfect bakes, but it was her carrot cake that looked like Scotch eggs and a pork pie that took the cake, excuse the pun, with Paul and Prue deeming them exceptional.

Steph had another nightmare this round, full of broken cakes, poor macarons and tears. While her lemon and poppyseed cake shaped like a burger impressed the rest were less than stellar. Unfortunately, this meant that Steph did not take the top spot, as predicted. Poor Steph truly broke my heart throughout this episode but I think she definitely has a bright future ahead of her.

Star Baker-less David took the overall prize, winning the competition thanks to his cake that looked like cheese. Showing exceptional skill, David definitely deserved the win, but I think if Steph had been on form, she would have blown him out of the water.

This season of Bake Off wasn't perfect, but I'll definitely watch it again next year. There was a slightly sour note this season, so I hope they recover the core values of the show sharpish. Otherwise, next season could be the last! 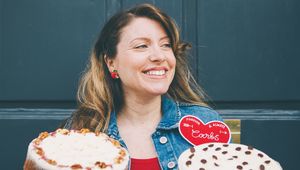 Here's how you can #ShopForIreland today