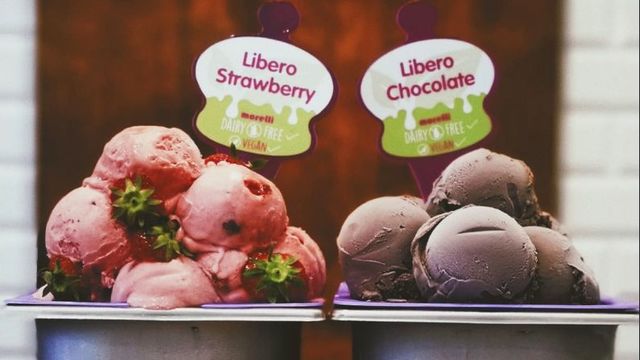 Morelli Ice Cream, one of Northern Ireland's oldest ice cream producers, has announced that it will venture towards dairy-free ice cream for the first time ever.

The Morelli family have been making ice cream in Ireland since 1911 when brothers Peter and Joe left Italy in search of work. Eventually, the pair settled in Ireland and opened a café where they began to sell ice cream made according to their family's recipe. The ice cream became wildly popular and five generations later, Morelli's now has several family-owned outlets in Ireland, England, Paris and Dubai, as well as numerous franchises around the country. Their delicious ice cream can also be found in a range of Tesco, SuperValu and Centra stores around the country.

Having been in business for over 108 years, the Morelli family had avoided producing a dairy-free variety as they hadn't found an alternative that rivalled the quality of their original products. Now vegans and lactose intolerant individuals alike can rejoice, as one of Ireland's best ice cream companies has finally created a dairy-free variety.

Speaking about the new product, sales and marketing director Daniela Morelli-Kerr told us that the vegan ice cream was the most challenging product that the company had developed.

"We’ve been approached over many years for dairy-free ice cream. We had to find a way of replacing the milk with ingredients that maintained the creaminess and flavour long associated with Morelli’s ice cream. We settled on a base of healthy coconut oil to replace the milk. This is the right time to introduce our dairy-free ice cream because we were getting asked for it a lot so we knew there would be a market for it.”

The new dairy-free Libero range is now available in strawberry and chocolate flavours, but Daniela says that Morelli's are developing more flavours which will be available in stores soon.

Have you tried Morelli's new dairy-free ice cream? Let us know what you thought of it in the comments below.