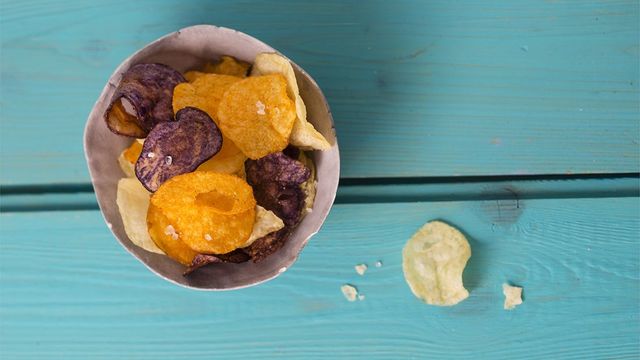 In today's edition of our Meet The Makers series, we're taking a look at some of our favourite producers from around the country. Check them out below.

We're lucky to have so many talented food producers in Ireland. While we all know about the abundance of dairy, cheese and alcohol producers in Ireland, we also have heaps of great people around the country that are making delicious crisps. Check them out below.

Based in Cork, Joe's Farm is a family-run business producing absolutely delicious vegetable crisps. Set up by husband-and-wife team Joe and Sandra Burns in 2014, the couple was inspired to create their product after trying veggie crisps from the US. Innovative and full of flavour, these crisps highlight the best Irish vegetables. The pair also offer mixed potato crisps, which are absolutely delicious.

The new kid on the block, Clinton's Crisps are produced in Skerries, County Kildare. Set up in 2017 by brothers Martin and Sean Clinton, these artisan crisps are available in three flavours – sea salt and vinegar, mature cheddar and red onion, and our favourite seared steak – that are gluten-free and made with no artificial flavours, preservatives or GMO ingredients.

Did you know that all of our crisps are gluten free? • Clinton’s Hand Cooked Artisan Irish Crisps are also cooked with 100% rapeseed oil which has half the saturated fat content compared to other cooking oils • And our Classic Sea Salt & Vinegar plus Seared Steak flavours are also suitable for vegetarians • We use 40% less packaging than our competitors and all our potatoes are grown on our family farm in Skerries • #Clintons #Hand #Cooked #Artisan #Irish #Crisps #glutenfree

Founded by seventh-generation farmer Ed O'Donnell in 2007, O'Donnell's Crisps hit the Irish market in 2010 and have been going from strength to strength ever since. The Tipperary-based farmer decided to diversify his offering after struggling through the recession, which resulted in the birth of some of Ireland's tastiest crisps. We're big fans of the cheese and onion variety, but you can't go wrong with any of O'Donnell's crisps.

Based in North County Dublin, the Keogh family have been farming the area for more than 200 years. Founded in 2011, Keogh's Crisps was the first brand to market crisps and potatoes under the same brand. In the eight years since the company first opened, the team has produced a range of deliciously flavoured crisps, as well as unique popcorn.

Founded by Veronica Kenneally in 2012, Veronica's Snacks have been going from strength to strength ever since. Touted as a healthy alternative to regular crisps, Veronica's combine a range of veggies to create delicious vegetable crisps, potato crisps and more. We love that these crisps are a real passion project for Veronica, plus they're gluten-free, low in fat and salt.

Which crisp is your favourite? Let us know in the comments below.