Joshna Maharaj's Mission To Improve Food Services For All 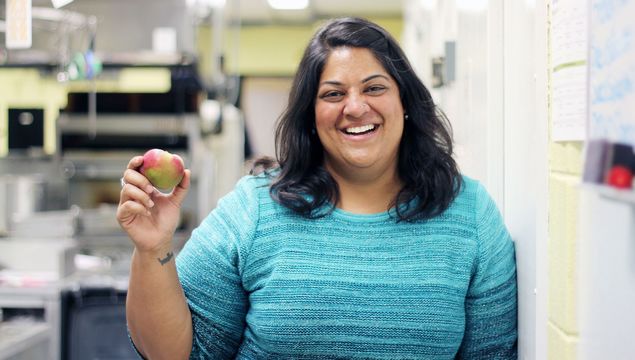 Joshna Maharaj, changing the systemIMAGE: Food on the Edge

Canadian chef and activist, Joshna Maharaj is on a mission: to improve the quality of institutional food. From hospitals to universities, she wants people to be offered real food, cooked with real ingredients.

Good food, hospitality and sustainability are key to the Take Back The Tray initiative and the aim is to help transform communities and individuals as a result. So far, she has worked with three institutions in Toronto, Canada:  Scarborough Hospital, Sick Kids - Toronto's Hospital for Sick Children, and Ryerson University.

Food&Wine caught up with her when she was in Ireland for the 2018 Food on the Edge (you can watch her inspiring speech, 'Take Back the Tray: Using Social Gastronomy to Rethink Institutional Food.' below). We asked Joshna about how she became interested in social gastronomy and her hopes for Take Back The Tray.

How did you decide to do this sort of work?

“I was never interested in working in restaurants, I was always much more curious about where people were eating when they weren’t at restaurants. And if there was an opportunity for a chef to get involved there. I worked in a community food centre for five years and then, because of that, when this first hospital was interested in making some changes, they reached out to Slow Food Toronto and they sent the message over to me. It fell in my lap a little but I think it was because I was a chef in the community who was ready to do something off the beaten path."

Were you happy with the results you saw?

"I always say it took us 25 years to get into this mess, it's going to take me longer than nine months to claw my way out. I was a director of food services at Ryerson University in Toronto and I had a full two and a half years on that campus. We really did get to actually changing the culture of the food there. But what I think the most useful thing about all three projects I’ve done is that I actually have figured out how to pull it off. It’s more about teaching me how to do this so I can, in fact, talk about it."

Institutional food CAN be at the forefront of innovation, vision & sustainability. Changing the food changes a whole lot of other things too. Join @takebackthetray, follow the link in bio and support my crowdfunding campaign! This morning, and I'm remembering how much I loved seeing the @ruurbanfarm tables groan under the weight of the organic produce that they grew on the roof of the engineering building. #institutionalfood #greenroof #grownoncampus

Are the changes you’ve implement going to continue?

"I get this question a lot and answer is, not yet. It’s tricky: in the hospitals in Ontario (the province I live in) we are unwinding thirty years of some mega slashing to healthcare budgets. That kind of what got us into this mess that we’re in right now. Unfortunately, I get nine months of funding to get in there and try to figure it out. Of course, as you do one thing you uncover all these other things that you haven’t even realised you need to deal with..."

Have you presented your findings to any members of government in Canada?

"I have and I’ve been really frustrated with our government’s [response]. They come and they take photos of me and a kid in a cast and some beet salad and everybody feels really lovely about what’s happening. And then they drive back up to their offices.

I suspect that part of it has to do with the fact that my verdict is ultimately is that investment is required. There’s no way that real food cooked by real human beings is going to cost less than this processed machine nonsense that we have now. I think that makes everyone pull away.

However, it's very clear that we’re not spending enough. [In Canada] we spend about 2% of what it costs for the hospital bed per night to feed the patient. That ratio is off. And what my work has so clearly illustrated is that for a small investment, I can give you an exponentially better experience. To me, that’s worth it."

One day during my first hospital project, I invited my pal @rodneybowers to cook lunch with us. We cooked a totally local lunch from scratch, and it was February in Ontario. We roasted turkeys, potatoes & beets. Rod made a mushroom consommé and quick pickles and we had an apple & sour cherry crumble for dessert. The plates were fresh and inviting, staff members followed their noses into the kitchen wondering what on earth was happening. The answer: we’re COOKING! Patients were thrilled with the meal, and the staff were excited to serve it. And when I finally crunched the numbers, we only spent $0.33 more per patient than we were already spending on food ingredients. For a small investment, I can produce an exponentially better experience, and THAT’S why I’m doing this. I need your support to get these lessons out to other hospitals! This change IS possible, friends. We just have to choose it. Follow the link in bio to support my campaign. #institutionalfood #localfood

What needs to change?


"The one really important thing around all of this is values around good food and sustainability are, unfortunately, not ensconced in any major foundational weight in our institutions. All of my projects have existed because a person in the right office happened to also have these beliefs in their own lives. They held the door open for me but it had nothing to do with their professional position. Quite often what I learned is when those people leave the spirit and momentum leaves with them. It’s quite insecure."

What’s next for you?

"I’m in the middle of writing a book about it all, which will be out in April 2020, and I hope that, with its arrival, we can really start to action [the idea]. If I have it my way I will grow into becoming a trainer or mentor so I can have a space for chefs who want to jump into a curriculum. There’s a lot of other training they need beyond cooking. I’ll train them and then deploy them to institutions that are ready to make this change and I’ll remain a more distanced mentor or a troubleshooter.  I feel like I have done the messiest work around digging into the bowels of it all and I’d like to share that with people."

For more information on Joshna and Take Back The Tray go to her website.