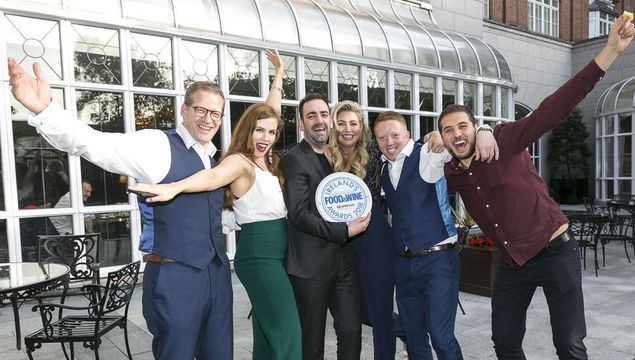 When Andy McFadden returned home to Dublin to open Glovers Alley, it was one of the most highly anticipated openings of the year, and the buzz around the restaurant and Andy hasn’t stopped since. Dee Laffan catches up with him since taking home the overall award at the F&W Awards 2018.

“It was my first time at the awards this year. I grew up with FOOD&WINE; I got a job as a kitchen porter with my uncle when I was 14 years old and I bought the magazine religiously. Ernie Whalley was editing it then. When I was working with Neven Maguire when I was 15, he was winning those awards then,” Andy recalled. 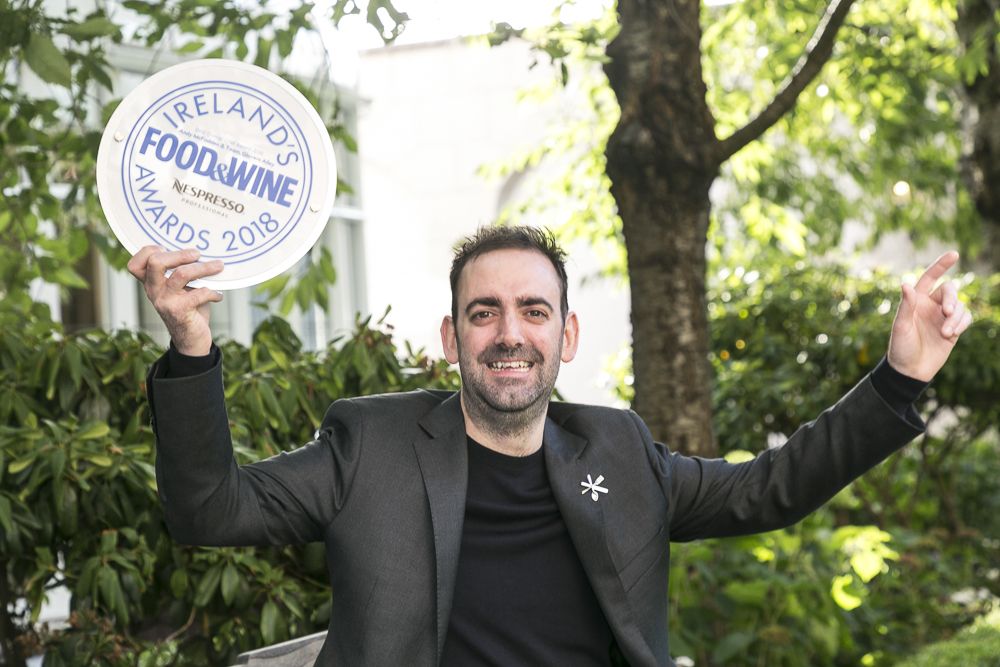 While Glovers Alley is still in its infancy, only opening in February, Andy and his team were awarded the overall Best Chef Award. An accolade that was given to him and his team as a reflection of their combined talents and collective working ethos.

“I didn’t think we’d get this level of recognition so quickly. I know some people might expect that but, from my own personal point of view, I just want to come in and do my job every day. I work hard; I start from zero every day and I push myself and the team and I try to achieve a high level at the end of the day. I think maybe that’s why we are where we are. To be honest we are only getting started and it’s amazing to get recognised, but we were still all back in here on Tuesday morning after the awards as we were fully booked for dinner and that’s the way it is.”

“The thing that was really great about this award was that it was for the team. It was like that for Chapter One too. That was really nice because I’ve always thought how sometimes one chef gets recognition when it is a team of people. I have 24 staff members here, including front and back of the house, and I don’t do everything on my own. So it’s great to see that FOOD&WINE are one of the first to recognise that and I think it is something the industry is recognising as a whole more now too.”

What an amazing day we had yesterday at our first @foodandwinemagazine awards. We couldn’t be more thrilled to have won the award for “Best Chef” @andy_mcfadden - thank you to everyone who supported us, not only yesterday, but since the beginning of our journey as a new Restaurant.

Andy’s ethos is certainly a reflection on a newer era in kitchens and the industry, where chefs collaborate, share and are more open to inclusivity among their colleagues. “I think years ago chefs were far more protective over their kitchen and recipes and what they were doing. Now with social media, everything is out there,” Andy explained.

“Obviously some people don’t agree with it or are still a bit protective, but I do think it’s the way the industry is going. We do anyway; we share stuff all the time. It is only good for the industry that everything is available. I think your restaurant, kitchen or food would be very one-dimensional if its just one person. When I was in London I did everything myself, but now obviously with Philly [Phillip Roe, Head Chef], I ask him what he thinks or what he wants to add or someone else in the kitchen might say, ‘what about doing this?’ and we try it out. In pastry too, I might come up with the ideas or Aoife will and we’ll break the dish down together and by the time we’re finished with it the dessert might be completely different to what we started with. It’s all about trial and error and bouncing off each other and working together.”

Our Kitchen team. Some of these faces have been with us since the very beginning of our journey in January and some have only recently joined us, but Glovers Alley wouldn’t be the same without any of these talented Chefs and their energy, passion, focus and drive 👊

In relation to the food in Glovers Alley, Andy has brought his experience as Head Chef of Pied-a-Terre in London to the plate in his new Dublin restaurant, but with the wealth of Irish ingredients at his fingertips. “I was in London for 12 years and I have been a head chef since I was 25 years old, I’m 33 now, my food now is not a million miles away from what I was doing before I left, however, there is more of a focus on Irish produce."

"When Philly and I came back, we knew that there was no point in importing from the UK, so we used the time between October and February to go around the country and meet different Irish producers. We met Peter Hannan in Moira to try his beef; we had never used beef before, which sounds crazy, only because my whole philosophy in London, and it’s still the one I have here, is that we only get in whole animals and you can’t get a whole cow. Well, you probably could, but it would be a nightmare!” he laughs.

“As a chef it is so much more interesting to get a whole animal, to see the different parts, whether it’s a deer, lamb, pig or ducks. For the guy on meat, okay he’s under pressure every day to break down the animal, but it’s structured – lamb on Tuesday, pig on Wednesday, ducks on Friday, even though we’re knocking that on the head now because we have grouse, partridge and hare starting, but that’s exciting for chefs! Beef is amazing and there is nothing wrong with getting a fillet steak and putting it in a pan and away you go, but to be able to cook the neck of lamb, or do something interesting with a shoulder, or back legs or the rack… then the food becomes more interesting. Then we have more options too because we have a good few menus – we have an a la carte menu, two different tasting menus, a lunch menu – and that way we have more to play around with.”

“We don’t have seasonal menus as such in the restaurant, in terms of launching one for each season, because there aren’t just four straightforward seasons anymore. There are lots of micro seasons. In fact, there are a couple of dishes that have been on the menu since we opened – the crab on the tasting menu and the Dublin Bay langoustines on the a la carte, with carrots, lardo and tarragon.”

“The ingredients dictate the menu. We have a lot of suppliers and we are always on the phone to them. We only get our lamb from Comeragh from Willie Drohan, beef from Peter Hannan, all our fish is from Niall Sabongi in Sustainable Seafood Ireland – these are specialist people and products. Chatting to them to see what products they have also dictates what goes on the menu.”

“Vegetables are the same. I don’t know if it’s a trend or for what reason, but Philly actually said to me recently that I am more focused on vegetables and he’s right. I don’t know why! I just started to go that way. The dishes aren’t as protein-heavy as before, they have a stronger vegetable influence. For example, we have a dish on the tasting menu at the moment and it’s a kind of play on words and a play on idea, we had beef tartare on the menu and now we have beets tartare. It’s the same idea, beetroot treated in the same way, but we do it in our own way. I really like it and it works and people love it.”

With the announcement of the 2019 Michelin stars today, Andy’s name has been thrown into the ring as speculators on social media try and predict who will be among this year’s coveted list in the Michelin Guide GB & Ireland 2019. “Everyone is asking me about Michelin at the moment,” Andy exclaimed. “I am fed up of people asking me, ‘are you going for a star?’ We’re not going for a star, we are going to be the best we can be and I want this restaurant to be the best and I want people to come here and have a great experience. I genuinely think that. I am not just saying it.”

“Michelin is there to recognise quality. I believe in Michelin. If we are at the required level, which I hold my hands up and say that I think we are, then hopefully we’ll get one, but who knows? It is what it is, yes I would love to get it and if we don’t I’ll be gutted, but we’ll just carry on regardless, being the best we can be and making the restaurant great.”

Andy and the team at Glovers Alley are share daily snippets from inside the restaurant on Instagram and it is well worth tuning into to see the country’s best chef team at work and having fun.