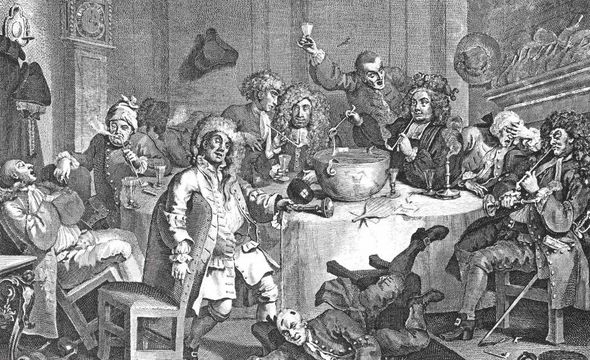 F&W resident cocktail expert and advocate of Great Irish Drinks, Oisin Davis, turns his attention to the friends-friendly-favourite, punch and fine examples of punchbowls made with an Irish kick.

You're out for dinner with a crew. Could be a work thing or just your mates; somebody suggests that a visit to a cocktail bar might be in order. That's all well and good until you realise that there's eight of you. If there are no drop-offs, that means there could potentially be eight different orders for drinks at the bar. One person wants an Old Fashioned, the next fancies a Martini, etc, etc. Before you know it, by the time you've been seated, read the menu, ordered your eight drinks and the bartender has made them, you're sober again. If there haven't been any drop-offs in the gathering earlier, there will be by now. The dial on the all-important craic-ometer will have dropped from a healthy 10 to a craic-tose intolerant level of six! Not the ideal flow for a night out.

There is, however, an easy solution. Before you decide on the cocktail bar, make sure they serve bowls of punch. That way the bartender can mix the equivalent of eight drinks or more in a fraction amount of time than making eight separate drinks would take. No drop-offs as there are no long waits. Alas, this is, of course, something that only a more seasoned drinker such as myself adheres to, but its the result of experience. For years now, if I'm out with a party of even six or more and we all want cocktails unless that bar has a punch menu, the session ain't happening there. This is sometimes annoying too as there might well be a bar that we could all be dying to hit, but not unless the punch bowl floweth. I don't care if the interiors cost a million euros and the menu was designed by Banksy or a descendant of Da Vinci, if I have to listen to Dave from accounts talk about Top Gear without a strong drink in my hand, I'll be in the first taxi home.

And yet, it's not always easy to find a punch serve in even half decent bars. Considering that punch is, most-likely, the oldest known cocktail and is the epitome of conviviality as friends gather around a chilled bowl of deliciousness helping and serving themselves, this is a shame.

In its infancy, punch was defined as a spirit mixed with citrus, sugar and tea, but these days one can be even looser with the ingredients. More traditional bartenders will incorporate the grating of citrus oils while others may not. Thanks to drinks historians like David Wondrich, we now know that bowls of punch became popular through the English navy and the explorers that brought them to far-flung lands in the East Indies where natives enjoyed local spirits mixed with citrus and sweeteners. This craze spread to the Caribbean and eventually further north to America where it is said the founding fathers and their guests drank dozens of bowls to celebrate the signing of the declaration of independence.

As Irish spirits are growing in popularity around the world, I wanted to see who's lashing out the punch bowls with some of our native whiskies and poitíns. Here are two very fine examples.

We’re waiting for you with cocktails and live music! Who’s coming to see us tonight? 

Growing up in Buncrana, Donegal, Chris spent vast swathes of his childhood working at his grandfather's bar, McGrory's of Calduff. In 1998, he opted for the somewhat warmer climates of California and after many years of bar management and educating himself to become a certified spirits specialist, last year she opened up his own spot, The Ordinarie, an American Tavern in Long Beach. The bar’s name comes from a statute in the 1634 Laws of the Commonwealth that stated: “every community is required by law to build an Ordinarie for the receiving, refreshment and entertainment of travellers and strangers.” Ordinaries were the forerunners of taverns and public houses.

While he may now reside thousands of miles away from his homeland, Irish whiskey still features heavily on his menu and indeed, in his punches, "Punch works great for larger parties, especially as a welcome drink for an event. We set up a station at the bar with a punch bowl and it takes a lot of pressure off the bar team when a group of 30 turn up for drinks or for Friday evening happy hour. Jameson Black barrel holds up really well in our Irish Black tea punch. The increased richness and stronger body stand up against the tannins in the tea and the spices." 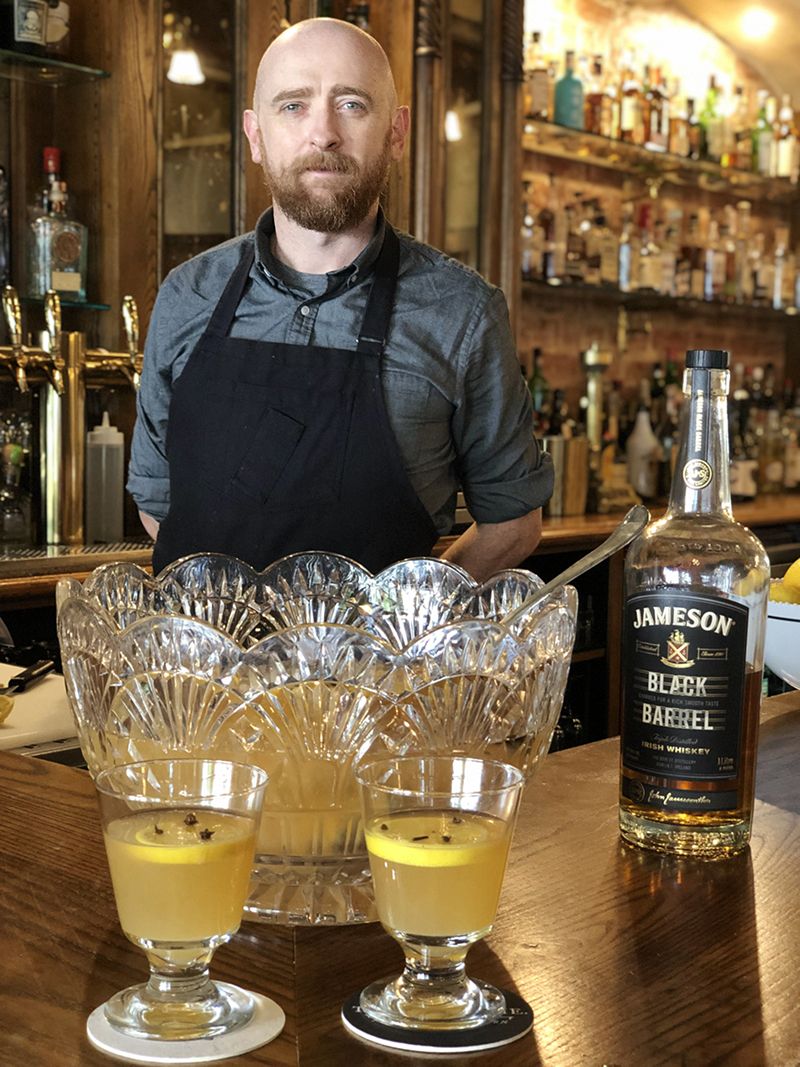 A large block of ice to fit in a punch bowl

Crafting the perfect drink takes a lot of time and dedication - thankfully, here at VCC, we've invested great quantities of both. #VintageCocktailClub #Dublin

A post shared by Vintage Cocktail Club (@vintagecocktailclub) on Apr 5, 2019 at 5:00am PDT

Like many a hospitality industry lifer, the Dubliner Gareth Lambe started out as a lounge boy but at the tender age of 12, that's probably a little younger than most! It was Fitzgerald's on Marlborough Street that gave him this break and when necessity meant that he had jumped to the other side of the bar, there was no going back. As he matured, Gareth fully embraced cocktails and opened up iconic Dublin bars such as Venu and Harry's on the Green before he went on to become general manager of Vintage Cocktail Club in Temple Bar. It is now firmly settled as one of Ireland's finest cocktail lounges, with a fantastic team behind it.

From the get-go, bowls of punch were a no-brainer for Gareth in Vintage Cocktail Club, "Our current menu is based around the History of what we all call Cocktails, it starts in the 1400 and finishes around the 1990s, Punch slots into the story around the 1600s, I had to include it. It is an incredibly unique way of imbibing. We always offer Punch to groups, its an easy way of getting a drink into everyone’s hand as soon as they arrive, cuts out waiting times and gets the party started almost immediately."

One other great feature about his bar is their dedication to using poitín, which he says, "It lends its self to everything and everybody, in the same way, dare I say Vodka does. Its very un-intrusive but still holds its self well in a mixed drink."

He mixes the Galway based Micil Poitín for one of their signature serves, the Red Cask Punch. And when it comes to how it's done, likes to get a little poetic, "Anyone can make Punch, just follow this simple poem, one of sour, two of sweet, three of strong, four of weak, a dash of bitters and a sprinkle of spice, all served chilled over ice. Learn as you go, its great fun, Recipes are endless." 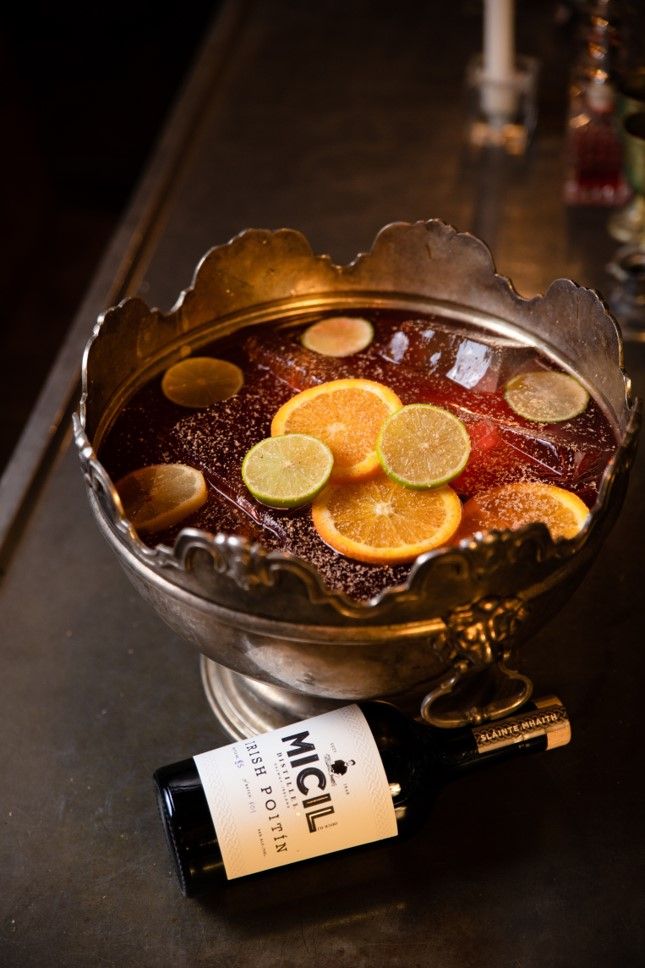