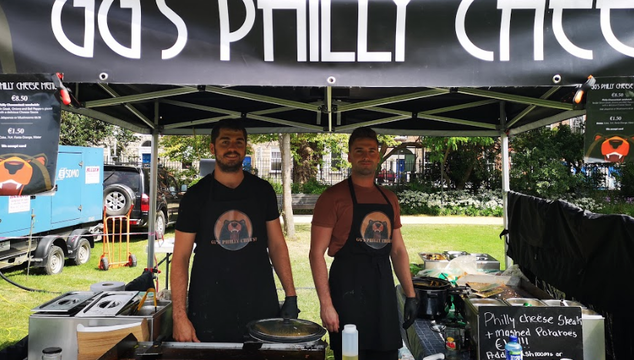 As food writer Mei Chin explains, street food in Dublin doesn't tend to be 'street' food. That doesn't mean you can't find some excellent fare to enjoy in the sunshine. In the first instalment of a new series, Mei checks out the Thursday food market in Merrion Square.

I confess, as a New Yorker with Asian heritage, I find the newly hatched Irish street scene bemusing. For one, the street food scene here is rarely on the street. (This is a licensing issue; there are no food trucks.) However, the recent warm spells of weather mean that Irish street food is no longer an extreme sport in which one must dine in torrents of rain. On Thursday lunchtime in Merrion Square, a pretty green park that houses an Oscar Wilde statue, it is international day with vendors selling everything from Nigerian pepper fish to Philly cheesesteaks. It is a cross between a United Nations and a picnic, without a shred of street cred.

It is still a lovely alternative for lunch when the sky is blue. Here are the standouts: 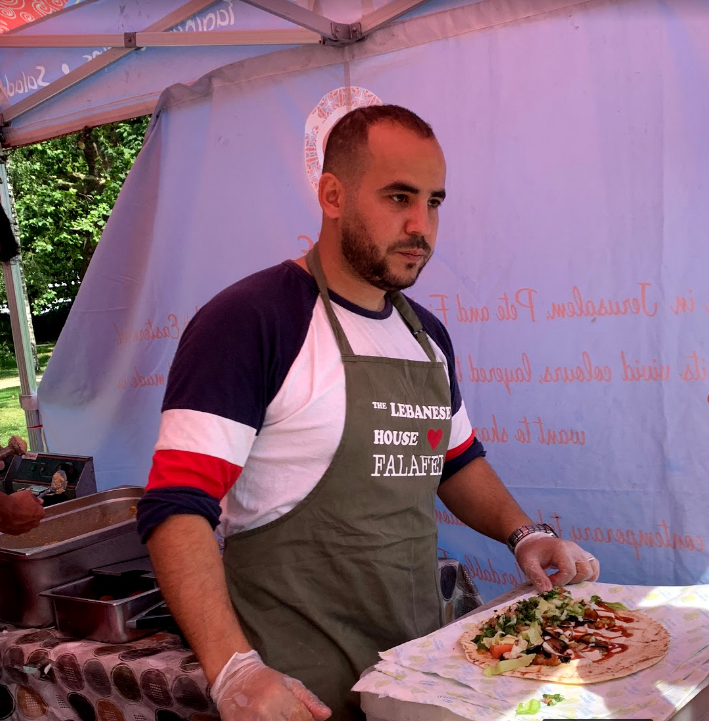 Ashbar at Taste of Lebanon

Ashbar and “Taste of Lebanon”

Ashbar at Taste of Lebanon claims that he is one of only true Lebanese here selling Lebanese falafel. I never understood why Middle-Eastern food is equated with junk food in Dublin, and the healthiness and the sunniness of Ashbar’s food sings. There’s roasted eggplant, grassy tabouli, and coriander scented falafel. The mixed chopped kofte is not overloaded with meat and delicately seasoned.

Plus it is a good sign, when confronted with international food ventures, if there are many of the people of that country milling about. At Merrion Square, there are a lot of Lebanese nibbling around Ashbar’s stand.

Tip: Finding Ashbar is tricky, because he’s located in a tent called “Sumac,” which advertises food from Jerusalem. Ashbar borrowed the tent from a friend a while back. 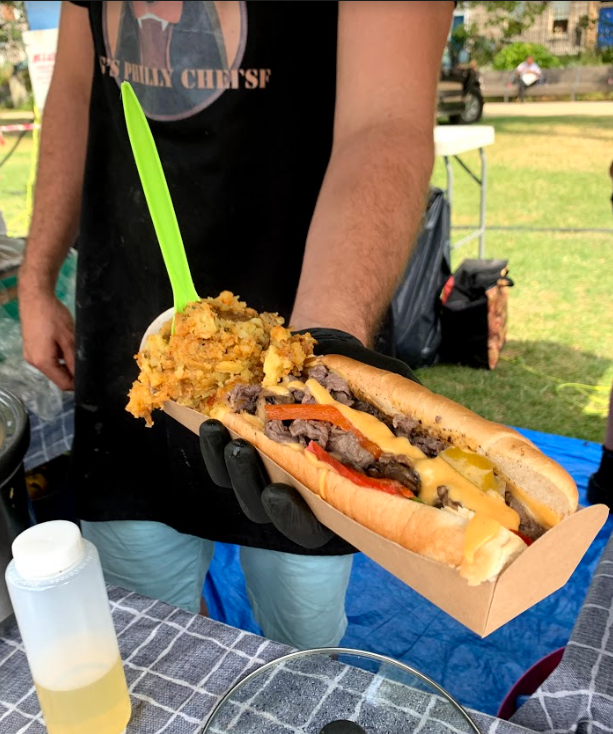 I am a cheesesteak aficionado, but my loyalty lies with my birthplace of Atlantic City, New Jersey, as opposed to neighbouring Philadelphia. Hence, my favourite version of this Italian-American classic is at Dino’s on Ventnor, where the buns are chewy, the provolone is oozy, and there is a house-made hot pepper sauce spiked with vinegar. Therefore, when Eoin of GG’s confesses that he prefers the cheesesteak from his corner deli when he lived in BedSty, Brooklyn to the one at legendary Philadelphia’s Gino’s, the cheesesteak lover in me understands. Your first steak is always the best.

Cheesesteak is a proper, summer street food, meant to be consumed on the boardwalk with your goombas. Eoin slices his Irish beef paper-thin on a deli-slicer and packs it into soft rolls with hot sauce and soft cheese. His cheesesteak may not be the best Philly steak in the world, but it’s the best I’ve had in Dublin, plus it authentically shares this iconic sandwich’s spirit. To paraphrase The Godfather, you gotta give Eoin’s cheesesteak…respect. 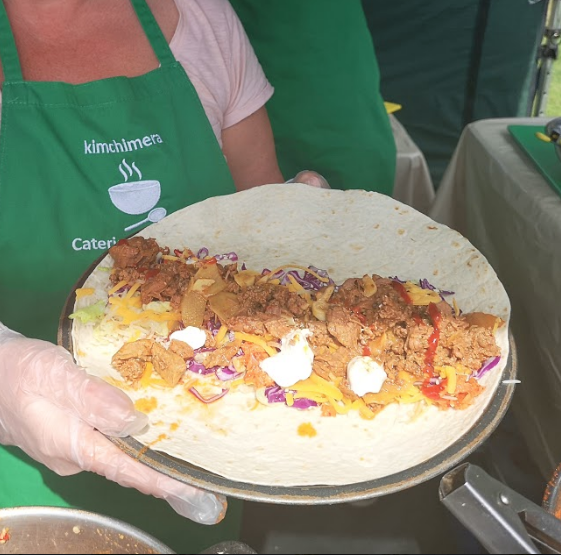 Every bone in my cultural-appropriation-aware self wants to resist Kimchimera, whose Korean-Mexican burritos are made by a lovely Irish couple who have never been in either country. Yet their gochuchang spiced Irish beef burritos are irresistible. Besides, the Asian fusion burrito is great street food.

I had assumed that Kimchimera was copying Roy Choi’s Korean-Mexican food truck, Koji, in LA. In fact, Niall and Edel began one of Dublin’s first Indian restaurants, Namaste on North King Street, where they learned the charm of wrapped foods, like dosa. At Namaste, they hired a Chinese couple, Jacqui and Mark, from Shenyang, a Northern Chinese province on the Korean border, who introduced Niall and Edel to gochuchang. Eventually, the owner of Parnell Street’s Hophouse Kimchi shared her recipe with the couple for the fermented cabbage Korean staple.

Get the mix of ground beef and bulgogi, which comes with kimchi, rice and cheddar cheese. Who knew that Irish dairy, Irish beef, and Korean spices would go so well? 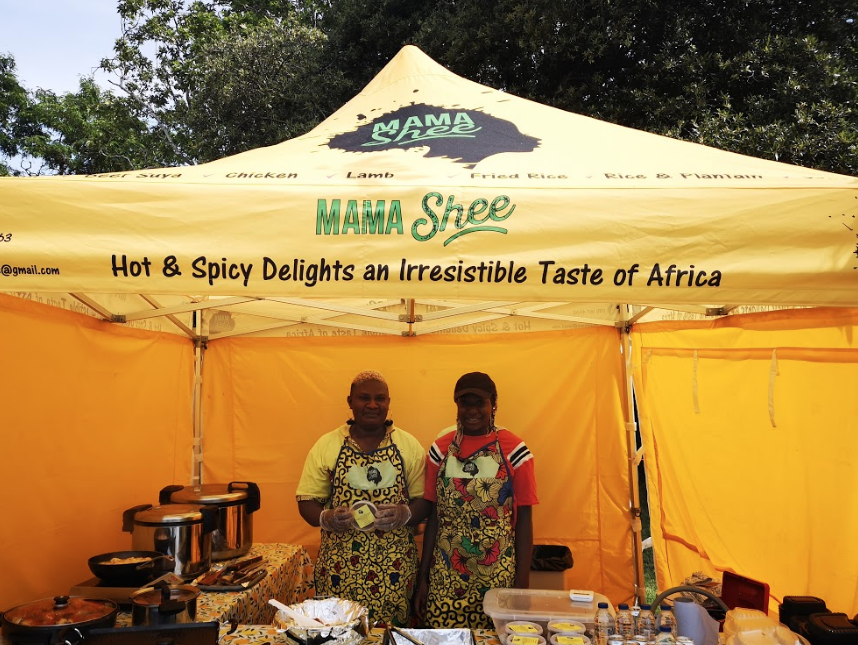 For a culture that excels at craic, street food in Ireland is pretty staid. The party at Merrion Square is at Mama Shee. Nigerian-born Edizemi Onilenla (whom most call “Emi,” pronounced “Amy”) learned cooking from her mother. At her stall, you find whatever Emi, or Shee, as her husband calls her, dishing up whatever her passion that day dictates. “Hey,” says Shee to one customer, uncovering a small saucepan that smells of heat and garlic, “I’ve made this hot pepper sauce especially for you.” The banter and the queue start at eleven o'clock, when her good-looking children are chalking up specials. This can include a peppered fish stew of Pangasius catfish, lamb stew, grilled chicken and always Jollof rice, and fried plantain, or dodo. 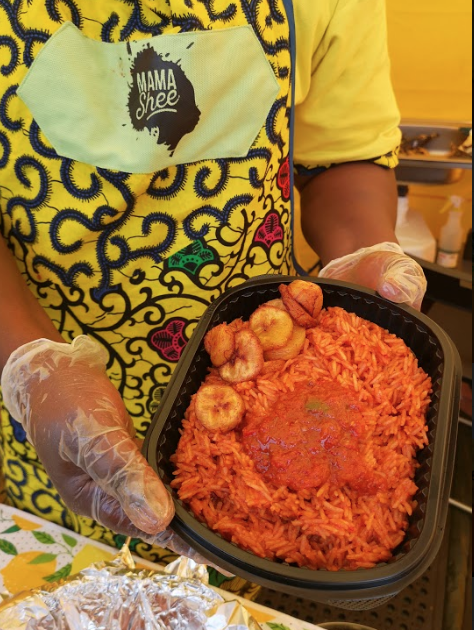 The Nigerian street food tradition is similar to that of Hong Kong and Taiwan, in that it is divided into what people eat on the street (nuts, sweets, skewers, dumplings) and what people buy to take home. Mama Shee’s style of food  (stews and rice), in my opinion, belongs to the latter category. A mixed plate costs €12, and is massive. Therefore, I like to bring Mama Shee back with me, where I can recall her exuberance in every bite.

Mei is from New York and Connecticut. She has written for Saveur, Lucky Peach,
New York Times, Irish Times, the Sunday Times, Gourmet, Fiction, Bomb, and is the
recipient of the James Beard MFK Fisher and two IACP Bert Greene awards. She is
currently collaborating with editor and writer Georgia Freedman on a new
magazine, Ampersand: Eating at the Cultural Crossroads. Now based in Dublin, Mei
spends much of her time obsessing about Caesar salads, tacos, and martinis. Follow Mei on Twitter and Instagram.