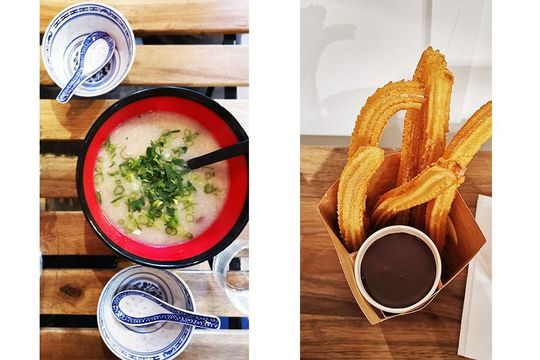 Congee in Bowls by Kwanghi Chan & Churros with Chocolate in Sweet Churro.Dee Laffan

Food writer Mei Chin explores the world food community in Dublin in her Global Beats column, and in this first instalment, her taste buds are singing for some savoury beginnings and sweet starts in the form of Cantonese Congee and Caracas Churros.

When I wake up in the morning, I like some salt. Lox in my bagel, feta in my omelette, and sometimes, anchovies straight from the jar. Congee is the Chinese breakfast staple of rice simmered with water and/or stock until the grains burst and go creamy. It is somewhat soup and a little bit porridge, neither of which I have kicked out first thing.

For the Chinese, congee is both breakfast and a general panacea. Soothing like mashed potatoes, it is the cure for hangovers, food poisoning, and the flu. The word “congee,” as I only recently discovered, is not Chinese. The Chinese word for congee is zhou, the Cantonese word is jook, but congee comes from the Tamil word ‘Kanji’ which means rice-water. Avoid Northern Chinese congee, called xi fan, or watery rice, which is a flavourless gruel that would challenge Oliver Twist. “Pah!” says the owner of Ka Shing on Wicklow Street, waving a manicured hand, “what do Northern Chinese know about zhou?” 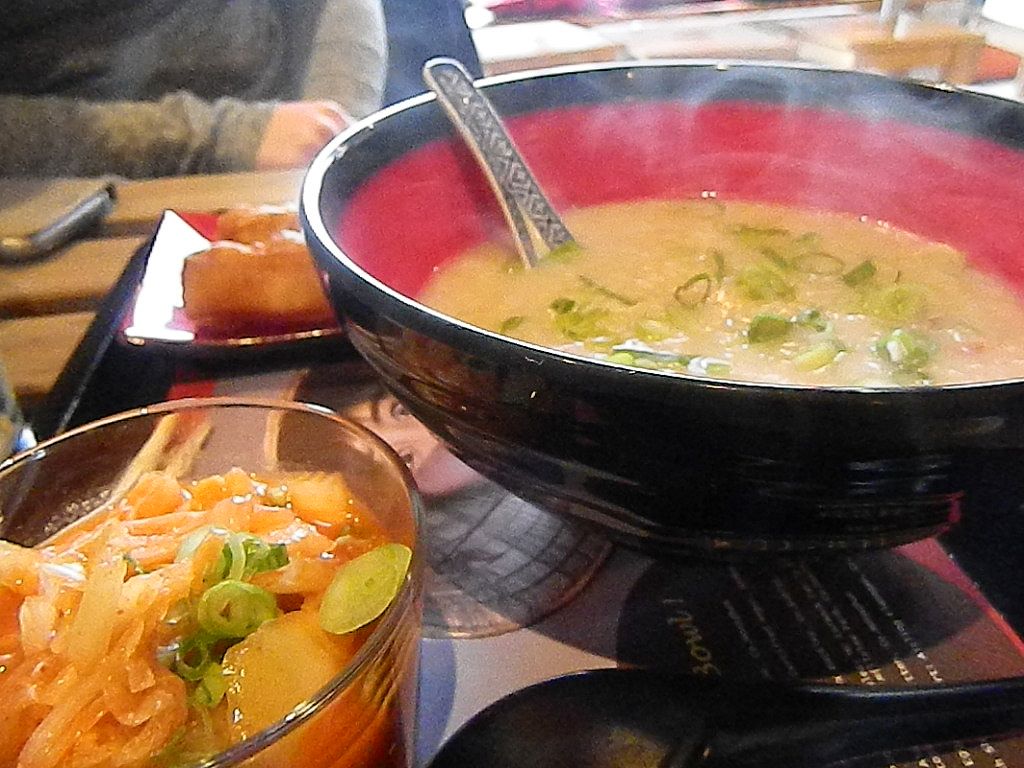 Getting a Congee Fix in Dublin

Congees range from brothy to creamy, salty to subtle, loose, or so thick that you can stand a spoon in it. Hong Kong-born Kwanghi Chan starts serving his congee at his Marlborough Street restaurant Bowls at 8 am. His chicken congee is delicately flavoured, the rice cooked in a classic French-style stock from roasted chicken carcasses and made Asian with scallion. Laced with fresh ginger, white pepper, and a caress of sesame oil, this is the closest congee to American-Jewish chicken soup. It is also the Pride and Prejudice of congees, in that it is a refined, easy-going introduction to what is a piquant, complicated oeuvre. 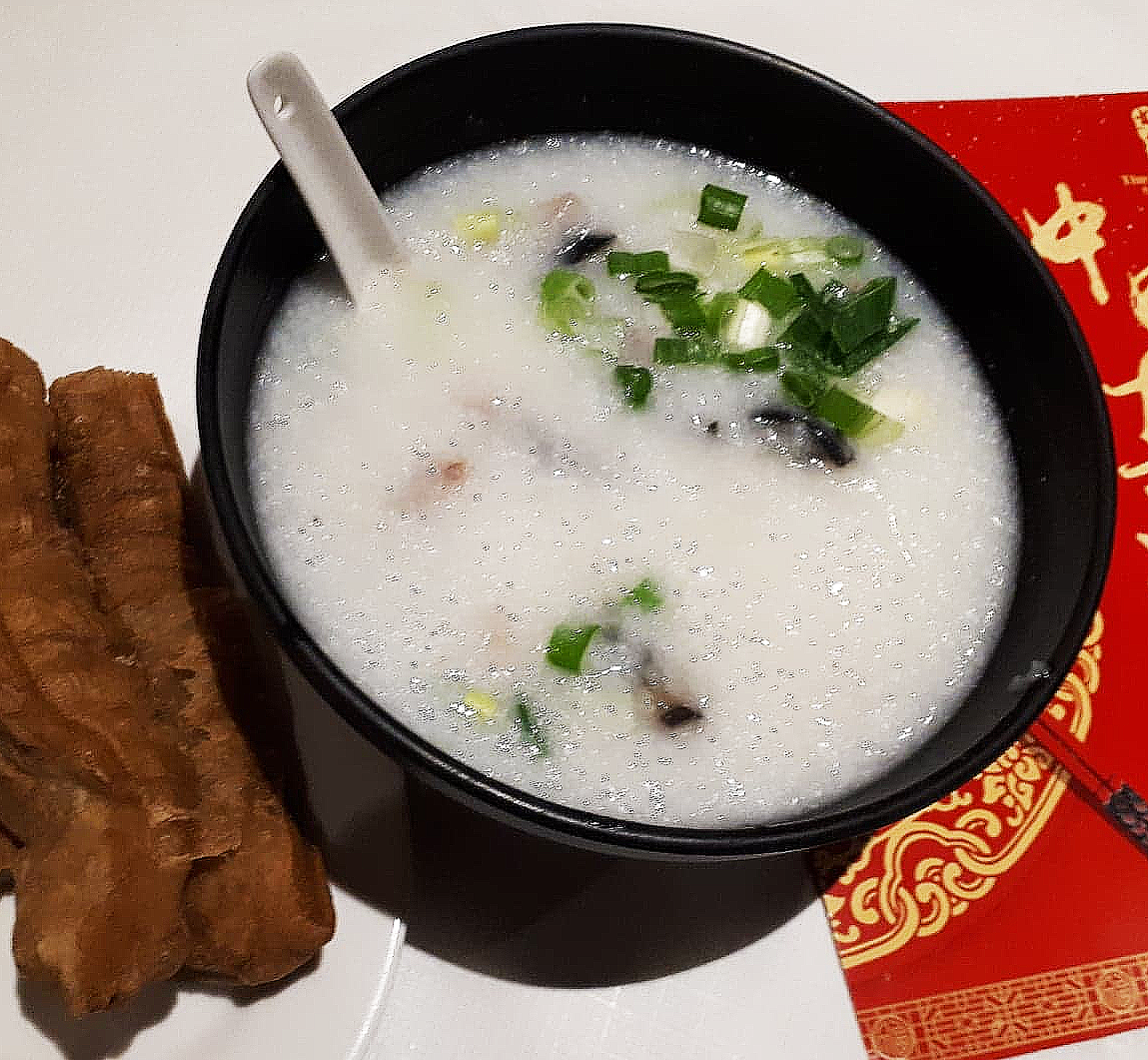 In the world, there are crab congees, medicinal congees made from hong zao dates, and congees that have merited a Michelin star. Turkey congees are a relief from holiday indulging. In Dublin, you can find fish congee with sea bass at Ka Shing, and with monkfish at Good World on George’s Street South.

Footnote: Ka Shing and Good World have had congee on their dim sum menus for years, and now Kwanghi Chan is serving it at Bowls. So far in Dublin, I haven’t seen it anywhere else. 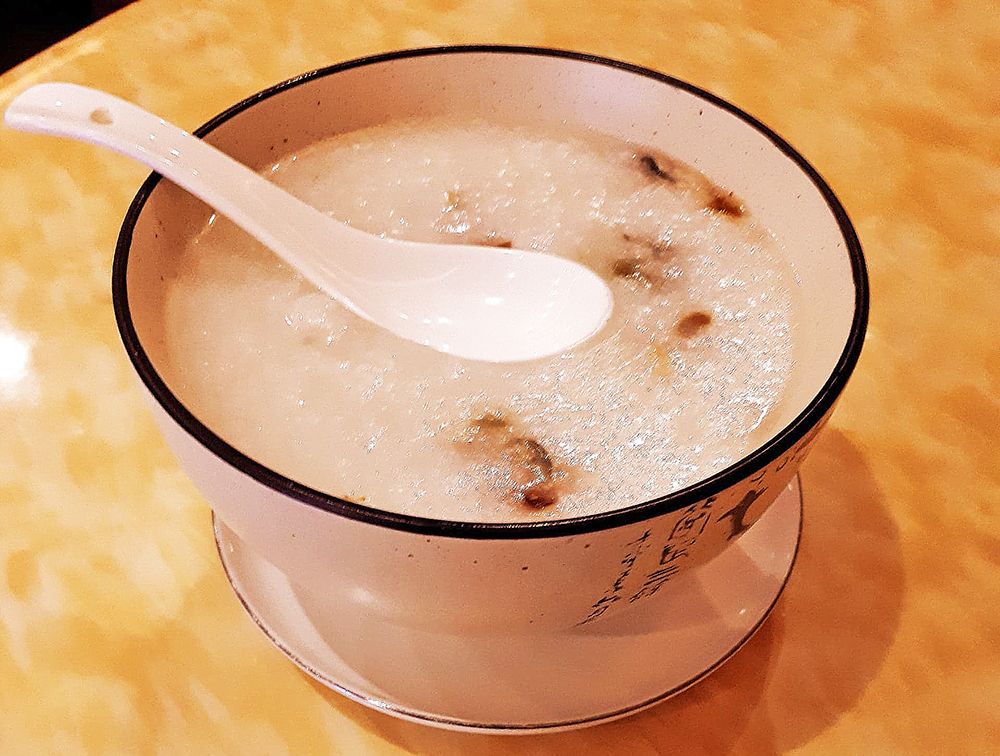 However, the gold standard of congee is pork and preserved egg. It is what Kwanghi Chan chooses for breakfast and the go-to for any seasoned congee aficionado. There is pork, highly seasoned, sometimes shredded, sometimes shaped into meatballs. Sometimes a pork bone, dried seafood or pickled vegetables are involved. However, the star is the preserved, or thousand-year-old egg, in Chinese pi dan, and daunting in any language. Treated with lye, the egg white becomes a quivering amber jelly, and the yolk turns an un-fetching green. I cannot face a pi dan whole, but when it is chopped and simmered in congee, I fight for the last satiny piece.

Good World’s version is salty, brothy, with large chunks of egg; the one at Ka Shing is thicker, creamier, and more like porridge. Currently, I lean towards the Good World version, but tomorrow I may go for Ka Shing’s pillowy pure white. One day I like my congee with salty Chinese doughnut, youtiao, another day sprinkled with just a bit of dried shrimp. Sometimes I eat it in the bathtub, other times, I scarf it standing! My taste in this regard is ephemeral, like Irish weather, for like the other things and people I love, my congee is an ever-changing, splendoured thing. 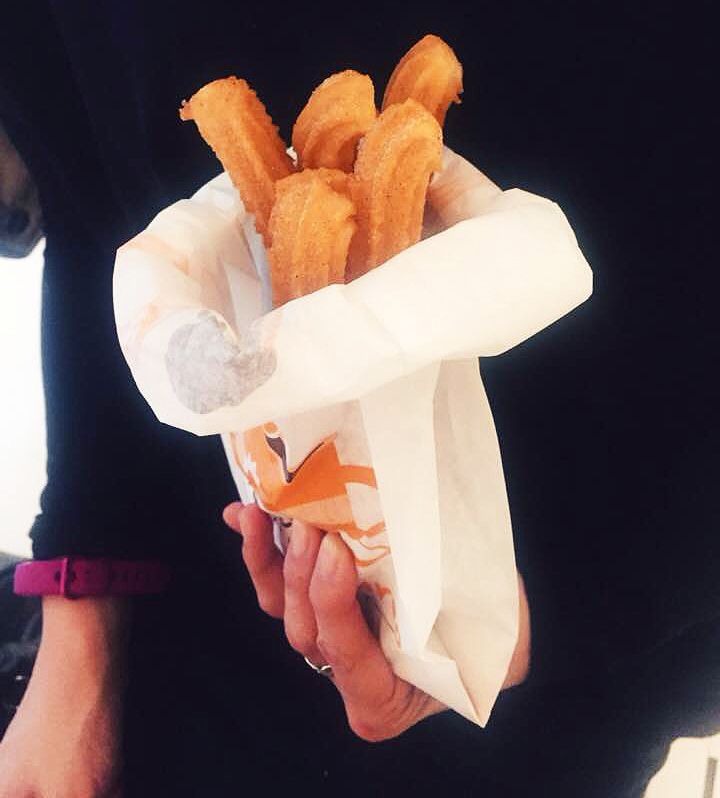 A Venezuelan Churreria in Temple Bar

Normally, I’m not crazy about pastry for breakfast, but I make an exception for churros. On Crow Street in Temple Bar is Sweet Churro, which, to my knowledge, is Ireland’s only churreria, and that means plain churros, filled churros, giant churros – fried while you wait. Many doughnuts these days are photogenic, dressed up as they are with sprinkles and glazes, but a churro is hot and fresh. What’s more, a churro enhances the charms of the person who eats it. Svelte, its ridges glittering with cinnamon sugar, it is like a cigarette in that it is impossible not to look sexy while holding one!

Venezuelan-born Nigely Maasud came to Ireland with the intention of starting a tour company. Instead, she started making churros with her mother. Chic and slender, Nigely laughs, “The thing about running a churreria is that I am always smelling of oil.” Happily, it has not turned her off her appetite. Tonight, Nigely, whose grandfather is from Madrid, muses, “I will make ceviche, and then an asposado with rice and shellfish broth and mussels.”

It is nearly impossible to get an authentic churreria churro outside of a churreria. When making churros at home, one usually uses a choux pastry leavened with eggs. However, a churreria’s batter like Nigely’s contains no eggs, so the airiness remains an elusive secret. In Spain, churros are eaten mostly for breakfast. In Venezuela, churros are dessert. In a nod to her international character of her clientele, Nigely has filled churros for the Brazilians, Oreo churros for children, and giant, Instagrammable churros with soft-serve ice cream that are popular with Asians. Also on the menu are maddeningly tempting Venezuelan taqueños – tender, crumbling, biscuit-textured pastries filled with cheese and fried until the cheese becomes liquid.

Nigely’s favourite churros are filled with dulce de leche, evaporated milk cooked until caramel. Myself, I prefer my churros the way the Spanish do, in the morning, dusted simply with cinnamon sugar, and accompanied by the foamy, slightly bitter hot chocolate that Nigely imports from Spain (A lot of Spanish hot chocolate is made with dark chocolate 'tablets', and is rich and not too sweet).

Also, I like to eat my churros like a Spaniard, which is to regard them as a sophisticated, dressed-up kind of treat. Churros are not bathrobe food; they are meant to be consumed with high heels, a blowout, and well-turned out friends. The next time you eat a churro, glance at your reflection in the window, and strike a pose; take the moment to relish just how tasty one piece of pastry can make you appear.