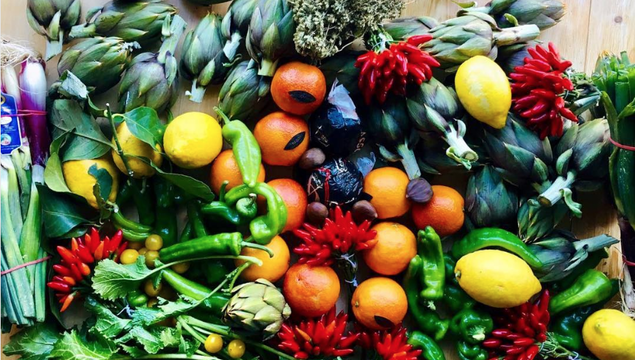 It is the last few weeks of winter and my kitchen is ablaze. I am slicing violet aubergines and white courgettes and while I wait for them to cook, I peel an orange and sniff the sweetness under my fingernails. Irish March. It’s terrific, right? Only someone who has been plunged into the unrelenting darkness of the Irish winter solstice can know the joy of finally seeing the hand in front of your face at 4pm.

More importantly, beginning in the last week of February, winter fruits and vegetable from Sicily and Calabria start shining in my local, Fallon and Byrne – exotic, radiant rays breaking through the dreary, Dublin grey.

It was two years ago when South Italian produce first entered my life. I was sitting at the bar at Piglet Wine Bar. Thibaud Harang slid a plate in front of me piled with strips of peppers slippery with olive oil. “From our Sicilian guy,” he murmured. A few days later, Luca de Marzio from Rosa Madre served me a plate paved with thin, pallid slices of tomato. “Marinda,” he beamed. Unconvinced, I put a slice in my mouth and then gasped as it dissolved into honeydew and seawater.

The infamous ‘green gold’ of Calabria. Bergamotto that is, not Richard. You may recognize it from earl grey tea and essential oils. Today we have it on in our pasta special with prawns and calamarata! . . . . . #bergamotto #grano #granodublin #special #pasta #hungry #lunch #casagrano #greengold

Grown in a rapidly-dwindling area in Calabria, the bergamot has historically been cherished by the French who use it in perfumes and by the English who use it in their Earl Grey tea. It tastes like a sweet grapefruit swished with lavender and basil, and its rind sparkles on seafood. The most perfect dessert I had in recent memory consisted of Southern Italian citrus segments, bergamot syrup, and olive oil ice cream.

Winter produce from Southern Italy carries the same cachet as a handbag from Milan. You will find them popping up in restaurants and happily also in some good retailers. ‘Tis the season for purple-leaved Sicilian artichokes, that Roberto Mungo from Stoneybatter’s Grano, likes to “jump” briefly into the pan to maintain their crunch. (In Italian, the word to jump is saltare from which the iconic dish of veal, prosciutto and sage saltimbocca or “jump in the mouth” derives.).

Calabrian native Roberto believes that these artichokes are most beautiful when paired with mint, the flavour of early spring at its purest. Sometimes, he layers them in a terracotta casserole with lamb shoulder, white wine, potatoes, more mint and fresh peas. 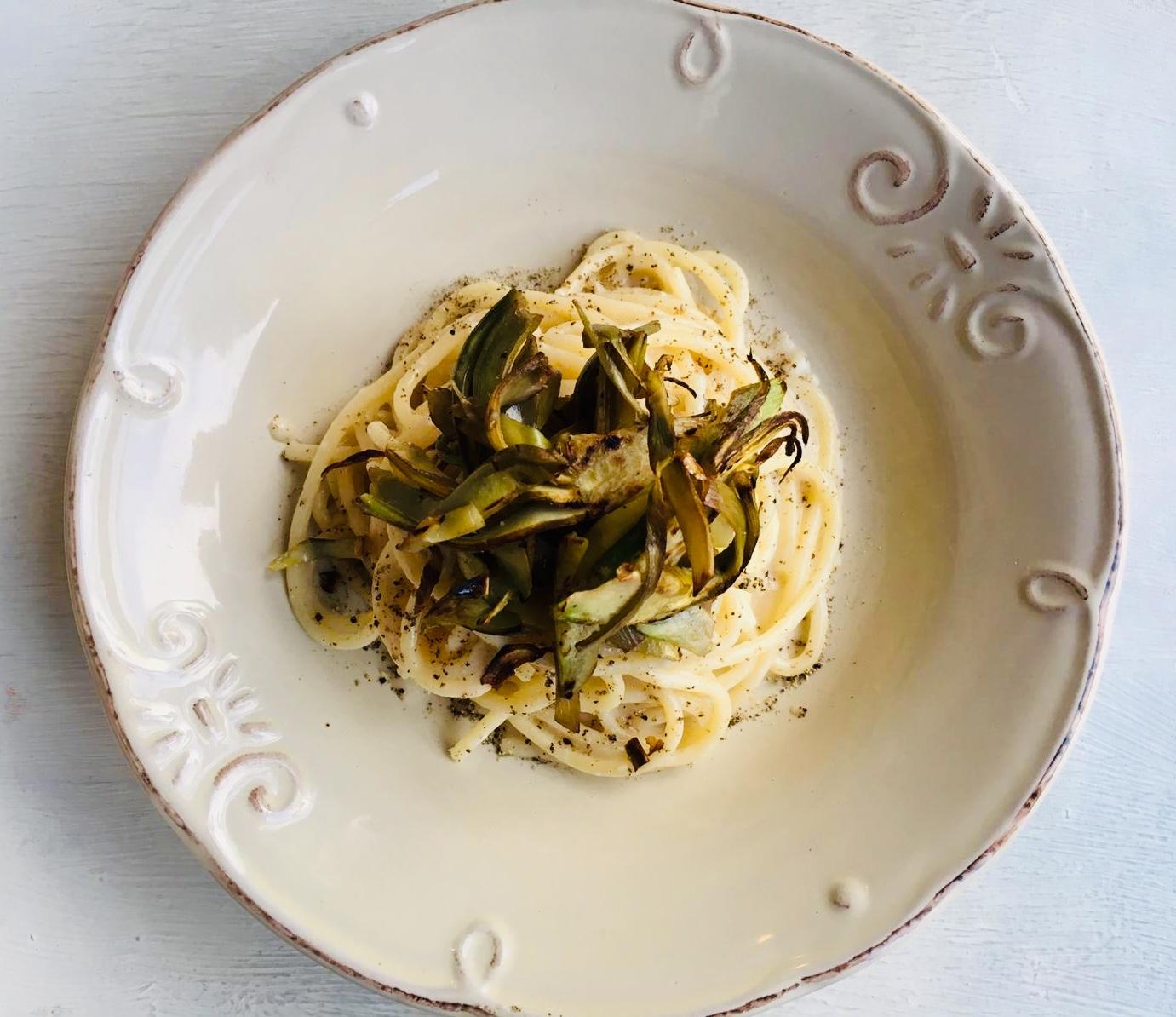 The tiny garnet chilis at Grano are grown in a neighbourhood in Calabria where there are also many flower farms, and they carry with them the aroma of roses.

Roberto loves chilis so much that he jokes he’d have them in his cappuccino if he could! Calabria chilis take well to freezing, so you can slice them straight from the freezer and you can have that floral, fresh heat year-round. (Roberto is not a fan of infused chilli oil)

As a rule, keep it simple, which means olive oil, garlic, and maybe some dried Sicilian oregano. My current crush is of white courgettes that I only noticed available in Dublin this year, with bumpy tender skins that weep at the press of a finger. Shave them raw, salt them to get rid of their copious liquid and toss with garlic, fresh mint, olive oil, and Pecorino, or simply roast them with olive oil and garlic until they swim in their juice.

Sicilian peppers are duller coloured than their glossy Holland counterparts and infinitely sweeter. Cook them with onions in a marmalade-like piperade, as Thomas Loisel and Thibaud Harang from Piglet suggest, or else make them into a “Catalan” confit by roasting, peeling, and submerging them in a low oven in olive oil.

Round pale purple viola aubergines sing in pared down Parmigiana with no breading and only a whisper of cheese. Grano does a Parmigiana with viola aubergines, swordfish and capers. My own version viola parmigiana is culled from an old recipe book, We Called It Macaroni. I dip paper-thin slices in egg, pan fry and then layer them with a touch of simple tomato sauce and Parmesan and bake until everything coheres. 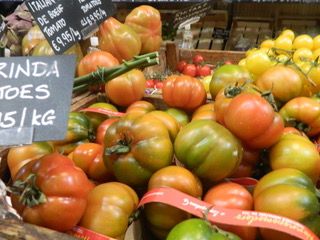 Eat winter Italian tomatoes raw. Pop those Sicilian cherries whole in your mouth. In my mind, nothing beats the crisp and sexy Marinda tomato sliced and sprinkled with salt.

Marinda, whose season is just starting, is squat and bodacious, its surface dimpled by cleavage-like ridges. It is meant to be a little green, for it is a winter tomato, for it soaks up the briny flavour of the Sicilian soil as it ripens slowly in a cool sun.

Marindas are fussy and flawed, but I will go through many tasteless ones because a perfect one is suffused with haunting mineral perfume. The Marinda was of the first Italian winter produce I met here, an appropriate introduction to a family of specimens that are weird looking and expensive. But when they are available, I gorge, for their window is brief. And when the Irish spring arrives, I will mourn, because it means that that the particular sunshine they provide – rich, complicated, and intense –will, without warning, be gone.

Attention all adventurers and dilettantes.

Piglet Wine Bar has added an “Old Vintages Experience” to its weekly line-up, which makes a few older wines, mostly organic, available to be sampled by the glass. It should be irresistible for anyone who wants to venture into more experimental, pricier territory without breaking the bank.

While the wines will change according to availability, the staff will always offer honest guidance. You can try all of four wines for what one bottle will cost you. 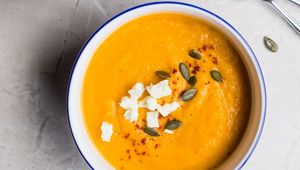 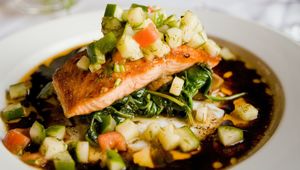 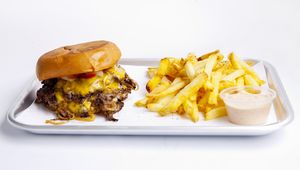 Dash Burger is now open on Kevin Street and it sounds so good.

Dash Burger is now open on Kevin Street and it sounds so good.