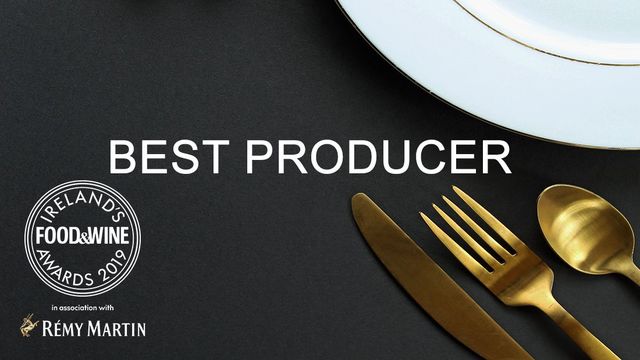 The food scene in Ireland is absolutely bursting with talent, and our great producers are the ones driving the industry.

At the 2019 FOOD&WINE Awards in association with Rémy Martin, we want to give Ireland's best suppliers an award to show the public just how great they are.

We asked those within the industry to nominate their peers to tell us exactly who should take home the top prize, with our judges scrutinising each category to determine the overall winners. Here, we look at the three workplaces shortlisted for the Best Producer.

Crawford’s Farm is a tiny organic farm based in northern Tipperary that produces some of the country’s best dairy. All of Crawford’s cows are reared in a holistic manner that allows the animals to be raised humanely and mimic natural systems. Everything produced on Crawford’s Farm is organic, free of pesticides, herbicides, antibiotics, hormones and GMOs.  Speaking about their nomination, owners, Owen and Mimi Crawford said, "Knowing how many amazing producers there are in Ireland, we feel not only incredibly humbled to make the top three but also incredibly grateful to the team of chefs that work pure magic with the products we provide."

Set up by Gary Grant, Imbibe Coffee has made a name for itself in the past year due to its commitment to the local community, sustainability, and unique coffee. Speaking about this nomination, Gary told us that he was delighted that the company was being recognised, “It shows us that people have gotten behind what we have tried to achieve. The business has been built around what we hope is a fantastic product and an ethos of conscious capitalism. In our first year, we donated 1% of turnover from coffee sales to Women's Aid. In year two, we are going to try to give a further 1% to projects in coffee-producing communities. The nomination has provided real inspiration to try even harder and we're very grateful.”

Waiting for your mouth...

Belfast native, now based in Newtonards, Co Down Mike Thomson studied at School of Artisan Food in Nottinghamshire, England. Following a stint as head cheesemaker at Sparkenhoe Farm in Leicestershire, England he returned to Northern Ireland. He created Young Buck Cheese in 2013 and raised £80,000 through crowdfunding in 2014 to get the company properly started. Young Buck is Northern Ireland's first raw-milk blue cheese and since its launch has won a variety of awards. The cheese is known for its rich, creamy and rounded taste, which Mike puts down to the raw milk he uses.

Who do you think will win this award? Let us know in the comments below.